The first story in a long line featuring the English private detective, Sherlock Holmes, along with his friend Dr. Watson, this volume introduces both the characters as they meet for the first time and work on a case (although it’s more that Watson tags along whilst Holmes solves).  Apparently Conan Doyle wrote 46 short stories and four full novels about this duo, and this was the first one to appear.

Since I finished it yesterday, I have been contemplating why the novel was called “A Study in Scarlet”, and then the answer came (via Wiki):  Holmes gives a speech to Watson about his work, and mentions “There’s the scarlet thread of murder running through the colourless skein of life, and our duty is to unravel it, and isolate it, and expose every inch of it”… Ah-ha!

As usual, this is a murder mystery presented (for the most part) from the POV of Watson who is looking for affordable housing in London upon his return, weak and recovering from illness, after having served the English Army in Afghanistan. The two meet (through a mutual friend) and after making a list of characteristics, they think they will make good flatmates. So off they go to 221B Baker Street. 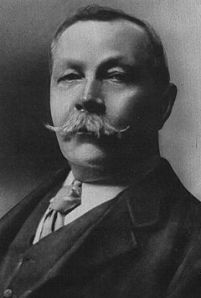 As always, this is a well written story that truly sucked me in, but the book (unbeknownst to me) consists of two parts and it seemed as though they were two very different stories without any connection. For the first book, we are based in London and some of the southern coast of England, and then the story seems to pause for a bit. Book Two starts and suddenly, for no apparent reason, the reader is in the barren plains of Nebraska with a dying old man and a young girl who have run out of water. The story continues (with no mention whatsoever of London or its environs) when the couple are rescued by the early Mormons traveling west to search for their Promised Land with their slightly nutjob leaders Joseph Smith and Brigham Young. Hold on a second. What on earth do the Mormons have to do with a murder mystery in London?

Perplexed but enjoying the story about the Mormons’ travel (helped tremendously by my learning all about Mormons from my trip to Salt Lake City), the US-based story continues. It’s a good one, but holy cow – I was so lost for most of it. What was the link with London? Was this a completely separate story and “Study in Scarlet” was over with some kind of PoMo ending that I didn’t get?

It wasn’t until toward the end of Book Two that it all came together, but really, there was no clue that the two stories were related until then. Sherlock Holmes and Mormons? London and Nebraska? Murder in the City and rebellion in the Mormon camp?  *Completely lost* for a while.

There has been some criticism in how Conan Doyle has presented the Mormons in this story, but when you look at the surrounding history that had just occurred, he really can’t be blamed for taking a negative tack. The Mountain Meadow Massacre had just occurred (1857) within recent memory, and to be honest, the early Mormons were a pretty violent group.

However, once you are filled in and given the rest of the story, it actually all hangs together and makes good sense, but holy guacamole, there is no clue before then. It’s really clever how it all fits together, but it really threw me off at first.

A good mystery story, and one of the first to ever mention using a magnifying glass to help solve a crime. I am not a huge reader of murder mystery type stories, but Sherlock Holmes is an ongoing fav right now.