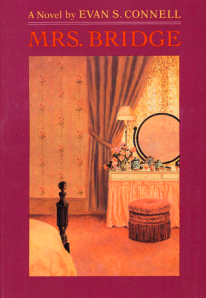 This is the story of an American housewife in Kansas City in the early-mid-twentieth century, living her pre-formed life of quiet desperation and doing her very best to fulfill the requirements of being a “good” wife and mother. If I went ahead and described the plot to you, it would seem to be intensely boring as nothing much seems to be happening, but the action is more psychological than anything and it’s riveting.

The book is written from a detached omniscient point of view of the protagonist Mrs. Bridge, so you can see her actions and her thinking pattern behind them. It’s a very quiet novel – but it is really good at communicating the silent scream of frustration of the American housewife in the mid-century. (There was some reminder of the short story, “The Yellow Wallpaper” by Charlotte Perkins Gilman in how trapped the protagonists feel.) Mrs. Bridge really wants to do what is expected of her, and is afraid of doing otherwise – what would the neighbors think? Her friends mostly all support this perspective, doing the very same thing, although there is one on the edge of the mix who insists on being “different” (i.e. independent), shocking though that may be. (I think Mrs. Bridge sort of admires her in private.)

Mrs. Bridge has the required three children, two older girls and a boy, all very different but all affected by the role that she plays in their lives. Reading this, I really felt sorry for Mrs. B. as she wants to be what she thinks she is supposed to be so much, it’s almost palpable. And yet her family is oblivious. Mr. Bridge continues to work very long hours at the office as he hides behind the escape belief of having to fund their standard of life. He also does not feel comfortable being with his family for long periods of time (or they with him)  – everyone is so alien to everyone else, even living in the same house and being in the same family.

However, Mrs. Bridge can be quite funny at times, even if it is somewhat accidental. The couple visit France (as part of their grand “European Tour”) and whilst in Paris, they visit the Louvre where she spends ages looking at the art. She comes across the Mona Lisa painting, and muses that she is quite amazed at how like the reproductions, it is. Another large grand sculpture rather reminds her of one of her neighbors in a nightgown. Everything seems to be grounded or tinted with the brush of domesticity, of being replicable… It was the time of TupperWare, of being a good housewife, of toeing the domestic and social line of expectations, and this is echoed in the main character.

And yet underneath this plastic veneer of attempted perfection, Mrs. Bridge shows flashes of independent thought: she flirts with learning the Spanish language, she attends a brief painting class.. However, these are very half-hearted efforts. Why is that? She complains throughout the book that she is bored (as the maid Henrietta does most of the household duties), and yet, she is filled with ennui and lassitude that sucks all the energy out of her when faced with the chance to do otherwise.

This was one of the best descriptions of the world of the wife during Mid-Century – the world of very cut-and-dry expectations, of having to toe the line and to act in an identical fashion to those in your social circle, each like the other and similar to the cookie-cutter suburban architecture that was being built at that time.  I did want to take her to one side and let her know that it’s ok to be different, but would I really have been much different if I had lived in that time? I would hope so, but it’s hard to say as I am looking back with a twenty-first century mind and the mores I am used to are nowhere near as repressing as the cultural mores she had to live with.

One frequent image that was mentioned throughout the book was Mrs. Bridge’s references to her china figurines – china on the outside and hollow in the middle. She feels that the outside world is unreachable for her (or her for them) and the end of the book is a clear reflection of this when she is in her stalled car unable to escape until someone else hears her. It’s a powerful image, I think.

Ten years later, Connell wrote a version of this book from the POV of Mr. Bridge. I have ordered it ILL, and will be very interested to see his perspective. This was also made into a 1990 Merchant-Ivory film called “Mr. and Mrs. Bridge” with Joanna Woodward and Paul Newman, but haven’t seen that either.