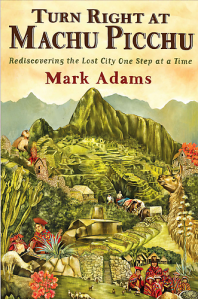 Mark Adams has been an adventure magazine editor for most of his career, and yet he wasn’t the most adventurous traveler in the world. He couldn’t remember the last time he went camping or carried a heavy backpack, so when the time arrived to mark the centennial of Hiram Bingham III’s “discovery” of the Lost City of Machu Picchu, he successfully pitched his idea of him traveling to Peru to follow in Bingham’s tracks, lack of experience and all.

I wasn’t that well versed in Machu Picchu, only having heard it briefly mentioned in other people’s travel stories, but I did relate to Adam’s complete lack of adventuresome skills and experience. (Camping – bleugh.) As the book progresses, we learn in alternate chapters about the journeys of both Bingham and Adams and how history progressed.

Adams is a good writer, plenty of self-deprecation and wit, and has organized the book very well to keep both his story and the history of the Machu Picchu expedition clear in your head. There is one map at the beginning of the book, but to be honest, it’s not very clear and not that helpful so I googled various locations as the book progressed. I learned a lot about the early Inca history, about the history of Peru, about the early history of Machu Picchu – and it all fit very well together. Additionally, Adams did a good job of blending the present in with the past, reporting how there was (at that time of printing) still some controversy as to who really “owned” the relics dug up there – Yale or the country of Peru. (This has since been sorted out, and Peru was given the historic remains as it should have been.)

One of the interesting aspects of this whole story was how few ethics Bingham had at that time about respecting the past and who owned what and when. He was a self-promoter extraordinaire and gave himself lots of the accolades for “discovering” the Lost City (even though other explorers had arrived before him, and a handful of Peruvian farmers were already living there when he arrived). He spun his adventure into several books and a whole issue of National Geographic (which was just getting started around then). Obviously, this question of ownership and discovery is not new – consider the controversy of various Egyptian discoveries etc – but what was new was Bingham was the Master of Publicity for himself and for his causes, and society was ripe and looking for a dashing explorer hero. He fit the bill.

Along with this history was also the story of Adams and his own particular journey to the Lost City with his Australian guide (rather a Crocodile Dundee kind of guy), along with their mule handlers and porters, all of whom seemed to have good stories. Adams did a good job of this – he admitted his lack of camping experience and demonstrated some of his hard-learned lessons from hiking – and yet he was very respectful of the Peruvians who provided all the support for this trip and without whom, he would have been cold and hungry. Adams also brings into the picture the various other players that have been involved at various points in the MP controversy:  the wife of the former Peruvian president, a secluded amateur scholar who lives in a tent in Alaska, and the reactions of his family and his editors.

An enjoyable read where I also learned a lot – highly recommended.

(Another interesting fact: rapper Tupac Shukar was named after Tupac Amaru II, a Peruvian revolutionary who led an indigenous uprising against Spain. Tupac’s mum and dad were active members of the Black Panther party in NY and obviously had high hopes for their son.)