Probably similar to many other anthologies or collections of different people’s work, this one had some good essays and some not-so-good essays. I think one of the keys of enjoying a collection of essays (or similar) is to choose an editor whose taste is similar to yours (if you can), so at least then the chances of you both enjoying the same style are higher.  For example, I really loved the America’s Best Travel Writing volume which was edited by Bill Bryson as I thoroughly enjoy his sense of humor and think he is a good writer.  (Credit for this train of thought goes to Kim of the Sophisticated Dorkiness blog  (who triggered this insightful idea. 🙂 )

All this to say that this particular volume of travel writing was just “meh”. Nothing seemed to stand out for me, really – nothing outstandingly good and nothing outstandingly bad. I enjoy reading travel writing (when it’s well executed), and so structurally, this was a good collection of essays ranging from straightforward to provocative to puzzling, so that was fine. There just weren’t any essays that really stood out for me in the collection. Not bad, not good. Just medium.

I am looking out for the “America’s Best Nature and Science Writing” which is part of the ongoing series and that my sister liked. Need to see if I can find a secondhand one somewhere. (Carefully adds this title to the staggering and dizzying heights of the current TBR pile.)

Oh, and then saw this the other day. It’s been up for a long time, but I have only just got the impetus to take a photo of it.

My philosophy is that if you’re going to make the effort to design and then put up an official sign in public, then wouldn’t you want it to represent your very best work as people are going to be driving by it one million times a week? So – why, City people, did you make this so unprofessional?  To me (and correct me if I’m wrong, but I don’t think I am), this is fine until you get to the bottom when it goes all squiggly and looks an awful lot as though someone somewhere didn’t really measure the sign and so when they tried to put the letters on, there wasn’t enough room and they thought “Hmm. If I make the words all crazy and out of line, people will think that I did this on purpose in a fun casual way” when really, it’s not really the truth. Someone somewhere must have approved this… Why? (Anguished cry echoes in the darkness.)

Another example of sloppiness is this one from the U.S. Navy (who, I presume, have a healthy advertising budget but whose copywriter is not that well informed with regard to grammar): 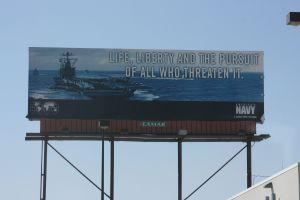