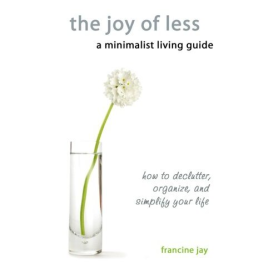 Having been a fairly regular reader of the Miss Minimalist blog (written by Francine Jay, the author of this book), I had a good idea of what to expect with this to-do book, and although the ideas and concepts may not have been particularly new to me, it was fun to read a book by someone who feels the same way as I do about materialism and the world (books excluded!).

The middle section where she takes you room-by-room using the same steps in great detail gets to be slightly boring, and once you have read one chapter, it’s not an intellectual stretch to apply those steps to another room in the house. And I do have to admit that there were places where I thought she was padding her writing – perhaps for a word count from an editor? Don’t know. (A minimalist author who uses plenty of words. Slight irony.) But big picture – a helpful book to simplify life that was written with enthusiasm.

It was refreshing to read writing by someone as enthusiastic about minimalist living as I aspire to be, and who is not completely wired into the materialist race that seems to be going on nowadays for some people.  The last section at the end of the book is more of a philosophical take on voluntary simplicity and not having so much stuff. Again, nothing too new for me, but good to hear it from someone else.

This is quite well written, nicely and logically organized, and has some good ideas and reminders. It also had some interesting concepts that I immediately grabbed on to as they made perfect sense. One of the concepts that Jay talks about is “resist the temptation to recreate the outside world within our abodes.” (Yes, she does sound rather snooty in that sentence, but she’s not like that throughout the whole book.) Jay then goes on to delineate what she meant by that, and with me and my *slight* book obsession, it meant that there is no need to recreate a community library in my house.

I don’t need to own it to enjoy it.

I have a great library network in town, and if they don’t have what I am searching for, then I can utilize the inter-library loan system (which goes nationally) and if that doesn’t work still, then I could also access the TTU library services. Or just buy the damn book online somewhere.

So – after reading this and realizing that *cough* I might be *cough* slightly recreating a library of *cough* mostly unread books in my house, I decided to go through some of the books I own, and cull them. (Don’t really like that word as it reminds me of the baby seals massacre. 😦 )

So, I went through my shelves quite ruthlessly and got rid of some titles, some of which I had been holding for twenty years or more. Honestly, if I haven’t read them in 20 years, I am thinking it’s fairly certain that I am not going to read them any time soon so why give them the space?…  (I realize here that I am probably giving you the impression that I emptied shelves and shelves of books and that my cases are bare… Not quite, but less packed than they were which is progress. Minimal, but progress. :-))

Other points from the book which seemed to resonate with me:

I don’t want to give you the impression that our house is hoarder-level craziness or anything. It’s already spacious and we don’t have a lot of stuff (on purpose). I do recognize that I do have rather slightly *cough* too many books in the back room… They stay corralled there though, and when you enter the house, you would think it’s a fairly minimalist house already.

So, suffice to say, a good and fast read which reminded me to stay on the Minimalist path and get rid of stuff. “Better out than in” as my Mum would say (except she was talking about other things!)…

1 thought on “The Joy of Less: A Minimalist Living Guide: How to Declutter, Organize and Simplify your Life – Francine Jay (2010)”