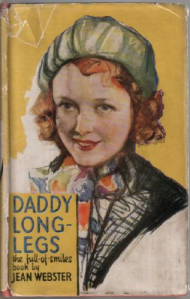 An epistolary novel written, presumably, for the new (back then in the early 1900’s) trend of girls going on to college in the US.  This is a good read featuring a strong female protagonist who is orphaned and lives in a home with other orphans. Having excelled in her earlier academic life, she is noticed by one of the orphanage’s wealthy trustees and given the financial means to attend college. Her benefactor would like her to be a Great Author (as she has done very well in English), and I found it very interesting to watch her evolve throughout her college years and vacillate between what she wanted to do, career-wise. (Again, a bold move as in the early 1900’s, women were just expected to marry post-school.)

So, in some ways, this was a cutting edge novel for the time.  Wikipedia posits that this novel “predates the contemporary view of adolescence”, and I do think they have a point. Up until this point, children were treated, generally, as small adults and so to admit that there was this developmental stage between childhood and adulthood was a big step. It’s also quite edgy in how Judy decides to become a Socialist and how she talks about that. (I am thinking that even now, in the 21st century, it would still cause a stir in some circles if this book was selected as a school read in some districts.)  Judy also frequently mentions women’s suffrage (which Webster was very focused on in her life), along with sensitivities for the poor (also a lifelong interest for Webster).

The set-up of the story is Jerusha (“Judy”) Abbott is the orphan who is noticed by the rich benefactor, She goes to college, but can only continue to receive her funding if she writes a letter every month to her sponsor. However, she knows very little about him, not having been told his name or where he lives, so has to develop a relationship with him based on her remembering seeing his shadow one day as he left after a meeting. Since this made him have very long legs and arms, she elects to call him “Daddy Long Legs” from then on.

So, this story not only covers the issue of higher ed for young women, it covers career choices and expectations of gender roles, and political and social topics. The ending was rather a let-down, but I will leave it to the reader to find out what happens. Suffice to say, things are tidily wrapped up in a bow, which I found a bit disappointing after having read about this strong independent young woman. Sign of the times, perhaps.

As a side note: “Daddy Long Legs” dolls were sold to raise money for orphans. (Early tied-in marketing for ya.)  (Couldn’t find a pic on the web of the original ones, although there are some rather spooky more recent dolls…)

Webster led an interesting personal life, including some marital drama (involvement with a married man), a lot of travel across the world, and political and social involvement. She died from “childbirth fever” a few weeks after the birth of her daughter.

I did think this was a well written novel and I can only imagine the huffs and puffs of indignation it must have produced from those who didn’t want to upset the status quo of women’s roles. Using letters is effective as it allows you, the reader, to see the world through Judy’s eyes and to learn of the world as she learns. I also really liked the fact that Judy was very human, with bad moods and impulsive decisions, and generally acting like a young college student would.  She also has a good sense of humor, which was appreciated.  She’s like a slightly grumpier bit older Anne of Green Gables. 🙂

This book also echoes the trend I have right now of reviewing gender roles in Victorian and Edwardian times and the challenges associated with trying to live outside the box.  Both Edith and Judy end up getting married, but each, interestingly enough, plans to continue on with their career plans. Yeah for the Rule Breakers!