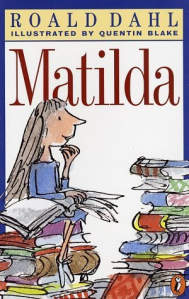 For some reason in my head, I had this novel written back in the 1950’s (perhaps confusing Dahl with another author called Ronald Searle*) so I was quite surprised to see that this was published in 1988 and thus referenced up-to-date cultural references. I also thought it was American, and this was swiftly corrected by the never-ending English/British cultural references throughout the story. (I loved the refs but wonder if the rest of the world miss them? It’s a good story if you get the refs or not, but they certainly add a depth to the story.)

This is by the same author as Charlie and the Chocolate Factory and James and Giant Peach et al. so it has similar themes (i.e. naughty people getting their comeuppance). What I absolutely *adored* about Matilda is that she loves to read and to learn. Her parents are not supportive of her academic endeavors, but she ends up with a capable teacher who encourages her and she succeeds in the end (although not without trial).

Her father, Mr. Wormwood, can be described by the following quotation:

“We don’t hold with book reading…You can’t make a living from sitting on your [bottom] and reading story books. We don’t keep them in the house.”

(Lots of refs to ongoing societal debate of relative values of liberal arts and science which seems to be cropping up rather frequently in my reading regardless of whether it’s 19th or 20th or 21st century… Hmm. Did they have this debate in the 18th century? I am not very familiar with lit from that time.)

Matilda attends a local village primary school with a tyrant of a headmistress who represents all the stereotypes of a mean PE (or Games) teacher. (Not like the lovely PJ who was my Games teacher and I loved, loved, loved.) The headmistress really doesn’t like children and would like to have a school without any kids if possible, but in the meantime, she spends her time as far away from the pupils as possible. However, seeing as she actually works daily in the school, there is a lot of uncomfortable interaction between them.

To balance this out is the lovely adorable Miss Honey (who has a back story which is perfect for the plot). Like her name (and in a rather Victorian fashion of having a name related to her characteristics), she is very sweet and nice to her students especially to Matilda who struggles to learn despite her awful materialistic TV-addicted parents. (The text and illustrations by Quentin Blake are pretty funny in places and I would think that quite a few of us will be reminded of people who we have met with similar characteristics. Variety makes the world go round and all that.)

As (justifiable) revenge on being treated meanly by people, Matilda and her friends engage on a series of practical jokes suitable for the elementary crowd:  putting a newt (sort of lizard) into one of the headmistress’s drinks, sprinkling itching powder in the headmistress’s clothes etc., setting up a fake ghost… All good fun and no one gets harmed in the making. Matilda also learns that she has power beyond the books which was a surprising twist for me. However, this power only comes when she is threatened and so it’s entirely a defensive mechanism which I thought was a good way to show a young kid gracefully handling such responsibility and ability. “With great power comes great responsibility,” as Voltaire is reputed to have said (and Spiderman’s Uncle Ben).

A great message throughout this book for young students (and old): that it’s ok to be clever even if it does make you the odd one out. Embrace your nerdiness, my friends. (Not that I had this problem when I was a kid or anything. Far from it. Sigh. I’ve been learning since I evolved into an adult. Late starter.)

This was also a very VERY English book – loads of cultural references, lots of English-specific jokes and word play etc., which definitely adds to the read. However, I don’t think that missing those would make it a lesser experience – just different. It’s obvious that this is a well-read title as the copy I received through the library was really used and well-thumbed (which I loved to see). There’s a movie out (1993), but I haven’t seen it. Does it still follow pretty closely to the book’s plot and humor? Or, seeing as it’s an American film, does it American-ize things? (Fine either way if well done. Just curious.)

* Searle is a childhood memory both from the never-ending films of St. Trinian’s (which I thought were pricelessly funny at the time) and the Molesworth book series (Down with Skool!), but also for his cartoons in Punch and other outlets.