Christmas has come and gone; New Year’s come and gone. Now there is quite a drought of official work holidays (apart from MLK Day coming up). The holidays were quiet and calm and we even had some snow on Christmas Day (which was lovely and didn’t last too long which was even better!)

With not much going on, I had the opportunity to do lots of reading and really relished this. To sum up, here are some mini-reviews of what I finished up over the last week or two: 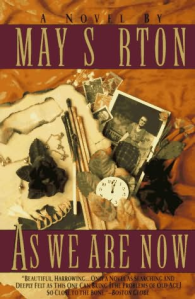 As We Are Now – May Sarton (1973). A short and sharp novel about an aging woman who has been shipped off to a retirement home and how it affects her mind. This was also epistolary (joy) and although clearly has its own merits in and of itself did remind me of “The Stone Angel” (Margaret Laurence) and also the short story “The Yellow Wallpaper” in how it portrayed the gradual erosion of mental wellness. A shocking ending – but does she?

Something Happened Yesterday – Beryl Bainbridge (1998). A collection of her newspaper columns from the London Evening Standard during the 1980’s. The columns are quite random in what they cover, and generally relate various anecdotes and brief discussions of issues ranging from taking a grandchild to London Zoo to gas rates. This was pretty good, but perhaps better if you are more familiar with her work.

Crowdie and Cream – Finlay J. McDonald (1982). An autobiography of a childhood between the wars and growing up the Hebrides. Boy, this guy is wordy but at least he has some interesting stories to relate and a good sense of humor. (“Crowdie” is, I think, a Hebridean name for cottage cheese.)

Heart Songs and Other Stories – Annie Proulx (1995). A collection of short stories set in rural New England and featuring the people who populate a small farming community. Its sparse narration and bare descriptions echo the barren land that people are trying to farm. The community is also bare of optimism or any slight chance of grasping happiness. (This all sounds a bit grim, and this is by no means a cheerful read, but it is good.) Proulx’s writing is reminiscent of what I call “Prairie Writing” (a la Willa Cather and Kent Haruf) but hers has a sharper edge to it. What I admire about Proulx is that her first novel wasn’t published until she was 56, and her second novel (The Shipping News) went on to win the Pulitzer Prize, the National Book Award, and numerous other accolades.

Century published which was most popular reading-wise: 53 from 21st Century (2000+). (If I was a gambler, I would have said Victorian era.)

Any patterns? 2006 and 2011 were very popular publishing years for my titles for some reason… (I read 11 from each of those years.)

Not a bad year, I must say, reading-wise.