Subtitle: The Amazing Journey of American Women from 1960 – the Present.

A detailed history of the women’s movement in the U. S. beginning in 1960 (when wives needed to get their DH’s permission to get a credit card among other things) to 2008 (with Hilary Rodham Clinton’s Presidential bid).

Without realizing it, I learned that I had had huge gaps in my understanding of women’s history in the U.S. I knew that things had changed for women in a big and significant way over the past forty years or so (and even before then), but it was all a bit vague in my mind, so this was a good read to help address that.

The book is structured using historical facts which are then bolstered with examples of individual women who experienced that issue being discussed. This added depth to the narrative, I thought, and a nice touch at the end in the final chapter was a follow-up of how some of these women previously mentioned had faired later in life. Thanks to these women (and their lawyers), life is better for women in the U.S. today.

(There was also a long bibliography at the back, and you know how I likes to add to my TBR list…)

As I turn 50 this year (holy cow! Old!), I was really too young during the 70’s to recognize the changes in how far women’s rights have come, but I could still experience gender discrimination myself (as others did, I’m sure) – more so when I arrived in Texas from England to attend college. (I found this to be very strange, as to me, America was always the Land of Opportunity. To arrive in this part of Texas in the 1980’s was to feel as though I had flown back through time to the 1950’s and it was quite confusing. Slap-bang in the Bible Belt and all that jazz. Remember – there was no internet back then so my new home was very isolated for the most part. Hard to compare Then with Now, really.)

My mum was also aware of women (or gender) discrimination probably because she was the recipient of it as she was growing up, and then receiving some of the benefits of this social shift. I was probably someone who didn’t really know any differently, and so took things for granted. (See paragraph below.) I do remember being allowed to do most things despite “being a girl”, although there were some marked occasions where I was told I couldn’t “because I was a girl”. Not that many though, luckily for me, so I was very fortunate to experience that freedom. I know other girls elsewhere who were (or are) not so fortunate as I was.

Moving to Texas was the culmination of a dream come true: to live in America! (And I still feel like that despite having been here rather a long time now… America is fantastic.) But as in anywhere with a different culture, there were some growing pains for the infiltrator (i.e. me).

The Division One university where I was on a swimming scholarship was required to follow the Title IX requirements to keep its funding. (Title IX was quite encompassing, but required (among other things) that both men’s and women’s athletics had equitable funding.)

Being a female athletic scholarship recipient (thank you, swimming coach) meant that I had a front row seat in this and it was a huge learning experience. The university swim teams (both men’s and women’s) trained at different times, but at the same facility called the “Men’s Gym” on campus (separate from the “Women’s Gym” which was smaller and had fewer facilities).

The women’s team worked out just as hard and for just as long as the men’s swimming team, and we all got just as hungry as they did. However, the university athletic department had decreed (and no one had objected) that the women’s team could not eat in the posher Athletic dining room which only the guy athletes could access. This dining room had longer hours, a nicer environment, and was rumored to have better food (although I don’t know that for a fact as I couldn’t get in there!).

The women’s team could only eat in the normal dorm cafeteria which had drastically shorter hours. This meant rushing from practice to the cafeteria trying to get there before it closed, and then when we arrived, getting the dregs of what was left over food-wise, and rushing to eat and go so the workers could close up the cafeteria.

The men, OTH, could take their time post-practice, have a wider menu to choose from, and longer hours to eat their supper. And what really brought the culture gap to the fore for me (UK vs. US) was that none of the female athletes fussed about this, and this was a complete shock to me – that it was OK with everyone to have the athletes of different genders have such different treatment. It was very hard to keep my mouth shut, but it didn’t go over well when I did mention this to team mates, and was interpreted as me being “foreign” and “too sensitive”.

It was very bizarre to me in many ways, and I look back on those times with amazement that it seemed to be OK with everyone. I realize that it’s not a Big Thing to mention wrt women’s rights etc., but it was important to me at the time. (Perhaps shows you how lucky my life has been if this is all I have to complain about… :-))

On the plus side, I was really very fortunate to have this athletic scholarship as it changed my life in so many ways and enabled me to emigrate, so it’s not that I’m ungrateful for the whole experience. It just really opened my eyes to how fortunate I was to grow up in a progressive family as I did, and that although America (esp. Texas) speaks basically the same language, the culture was very different. I think the world is much smaller now as travel has become easier and more accessible plus the interwebs are around, so perhaps there would be less culture shock now?…

I’m quite puzzled sometimes. I work on a large college campus and see quite a few female college students today refusing to call themselves “feminists” and/or partaking in the raunchy culture of frat boys (and others), while taking advantage of some of the benefits that are now integral to their lives – academic financial funding available, opportunities to do anything they want for their career, the chance to vote…

Is women’s history (e.g. right to vote et al.) covered in the US History classes still? Are younger people just not aware of suffragettes and the legal battles fought in years past? Or is it considered to be Really Old History and not relevant any more?  (Witness the review post I wrote of Caitlin Moran’s dreadful book “How to be a Woman”. Having read other reviews of this, it could be argued to be a generational difference in interpretation as well, as the bloggers who are in their 20’s generally love it.)

Perhaps it’s just the circle of life and the truth of the old saying, “the luxuries of one generation become the necessities of the next”…

So – back to the book in question here: I loved it. It was a fascinating, well researched and well written read about a topic that is important to me and which filled in a lot of my knowledge gaps which I didn’t even realise that I had.

Even if you’re only *kinda* interested in this sort of thing, you’re not a woman and you’re not American, it’s a good read. Honest. 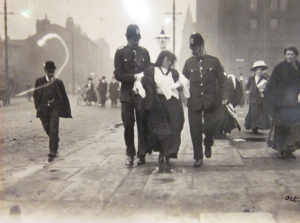