So – it’s time to do a catch-up post to chat a bit about some of the books that I have been reading, but that haven’t quite earned enough cachet to warrant a full post in and of themselves. This is not necessarily a negative thing to say about the books: some books trigger a lot of thought after the read and some don’t. These were in that latter group (generally speaking).

Just a good solid non-fiction read from a “boots on the ground” perspective of the genocide that took place in the 1990’s in former Yugoslavia. Not an easy read by any means, but Demick has maintained her authorial distance without giving up her passion about the people and the subject with whom she spent a lot of time. Interesting and hard to believe that the rest of the world took so long to get caught up on what was actually happening to these poor folk at that time.

Where’d You Go, Bernadette? – Maria Semple (2012). This was quite a fast read composed in an epistolary style of emails, reports, and journal entries from the PoV of a young woman who is trying to work out why her mother disappeared two days before Christmas. (All a bit weird, but not bad. It also included some good descriptions of Antarctica which was interesting. Nothing too mind-blowing though.)

Was hoping for more brilliance in fiction from Moggach from this read, but this one did not rate as highly as her other works. This is more of a character study with a psychological thriller twist so was very different from my usual choice of reading fare. What I like about Moggach’s work is that you never quite know what you’re going to get from book to book, which is both good and bad. This was ok, but not as enjoyable as some of her other works that I have read. 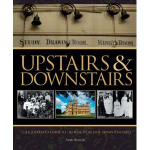 And speaking of Downton Abbey, I have just picked up a shoddily edited and shoddily compiled tie-in book called “Upstairs and Downstairs: The Illustrated Guide to the Real World of Downton Abbey” by Sarah Warwick. My recommendation if you pick this title up is to put it down. Do not pass Go. Do not pick up $200. Just put it down.

This is such an obvious weak tie-in that has been thrown out to cash in on the Lord and Lady Grantham craze, so poor that I would be embarrassed to have my name as author (if I did). Lots of lovely photos and pictures to look at but marred by such useless captions as “A husband and wife look at the river as it passes by.” What. The. Heck? No citation, no helpful info to identify the pic or its artist or who’s in it. No context. And did I mention the careless editing?….

I think, perhaps, that the publishers are focusing on people who may have only very superficial knowledge of social history at this time, but you know what? Even if these readers read this book, they wouldn’t have learned much more by the end of it. I think I have been spoiled by the skillful writing of Judith Flanders and Amanda Vickery, but apart from the pics in this book, there is very little to recommend this to other readers.

So a mixed bag overall, but mostly good.