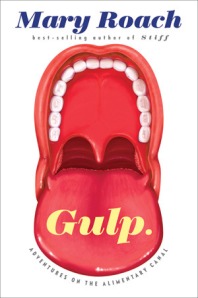 “People are surprised to learn: They are a big pipe with a little bit around it.”

As high as the bar had been set with Mary Roach’s previous books, this one reached it (if not higher). Roach is a smart, funny and good science writer who seems to ask the same weird questions of her experts that I would want to ask – she actually does though which elevates her to Superstar status in my eyes.

After having covered large nebulous topics before, Roach’s decision to look in-depth at the human (and other animal’s) digestive system from top to bottom is perfectly done. I know I might be crossing the line here in Fangirl raving, but she is that good. Honestly.

Gulp, her latest release, covers digestion from taste buds to umm… fecal matter, and everything in between in a meandering twisting manner that takes the reader down numerous rabbit holes, but not in a digressive manner – only in a natural trailing way so that you too end up as curious as she is about things you hadn’t really thought about. Who knew that people were paid to taste pet food to make sure it’s palatable and matches the description on the tin? (I didn’t.) Once I’d read the lists of strange things that people have swallowed (on one end) and have inserted into themselves (at the other end), you start to realize the plain fact that humans are odd. No way around that, I’m afraid.

Chapters cover everything from the mechanism of swallowing to fecal matter transplants (an important medical treatment for some cases) and none of it seems irrelevant. It’s all sewn into the content of the book in a seamless manner and when you add in the wit that Roach has with her writing, it’s fascinating. Even if you didn’t really like Elvis that much, he’s got a mention here – next time I see him, I will immediately think of his bowel problems, no doubt about it. It’s thought that he died of a medical issue that was not recognized at the time as it was quite rare – megacolon. Honest. You need to read the book to find out more.

(Speaking of Elvis, the washing machine repair man who visited the other day to fix ours happened to be a competitive Elvis impersonator. That was one fascinating conversation. Seriously. I had little idea about that world…)

I love Mary Roach’s writing, and I wish that we were friends (although that might sound somewhat creepy). She is one of the funniest and smartest science writers around, and whichever Roach title you end up picking, you’ll have an entertaining journey into a topic that you had no idea you were so interested in.

(Mary Roach is also hilarious in real life when we were lucky enough to catch her on an author visit to campus. Some authors need to never read their work (as they are dreadful speakers), but Roach does everything right when she presents her writing.)

And if you don’t believe how awesome Mary Roach is, here is an NPR interview which will prove it for you.