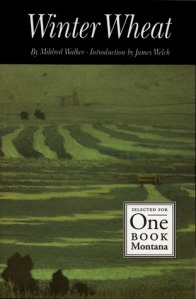 Mildred Walker is a new-to-me writer and somewhere somehow I came across her name on the interwebs. She is not a writer who seems to come up much in conversation, which is a shame as her work is very good and she deserves to be read more than she is right now. As the Philadelphia Inquirer once wrote, “You are either a Mildred Walker enthusiast or you are missing one of the best writers on the American scene…”

Walker wrote quite a large number of books, and I happened to pick up “Winter Wheat” (1944 about rural life in Minnesota) and then “The Southwest Corner” (1951) about an older woman who lives on the East Coast and is trying to decide how she should spend her end days. (Sort of a more likable version of Hagar in “Stone Angel”…)

“Winter Wheat” seems to be the title that pops up most commonly, but all twelve novels in her oeuvre have been republished by the University of Nebraska Press so there are other titles available out there. She has been compared with Willa Cather for her “prairie” writing, but from what I can tell, she covers a lot more territory than prairie in her travels across the world of fiction. So let’s look more closely at the two that I have read.

Winter Wheat is set in the rural world of early Minnesota in a small farming family who have homesteaded there. It’s very close to the outbreak of WWII and the uncertainty that comes with that, it’s not been that long since the Dust Bowl reared its ugly head in the Midwest, and Ellen Webb is hoping to go East to college (depending on the fortunes of that year’s farm crop). This is a bildingsroman novel , although this one seems to have a bit more bite to it than most. Ellen travels to college (a long train journey for this small town character) and whilst at school, meets another college student boy and they fall in love. Gil (the boyfriend) is invited out to the farm over the summer, but things don’t go as planned and by the end of the visit, things between the couple have changed.

Gil gives Ellen a new awareness of her home life – how far removed they are from “cultured” life on the East coast, how her parents have an ongoing prickly love-hate relationship with each other, and how close the family is to poverty. Gil’s perception impacts Ellen and so, when he leaves, there is a wake of dissatisfaction for Ellen in how she views her family’s world. It’s only as the summer progresses that Ellen learns to accept how things are and gradually moves on.

This is a bittersweet novel of how strong emotional ties can between family members and how easy it is to put your own ideas onto the lives of others. It’s also heavily tied up with the rural metaphor of wheat and its growth cycle in the harsh world of this dusty treeless world they live in. (This metaphor gets a bit clumsy at times, but it works overall.) Walker lived for a number of years in Minnesota as her husband worked as a physician, so I think she was quite familiar with the geography of the area.

The second novel that I read by Walker was still focused around gender roles and choices, but this time from the perspective of an older woman in Vermont who lives in a rural removed house but is considering what to do as she continues to age. Should she get someone to live with her as a companion and help? Should she move? I liked this title more than Winter Wheat, mainly because the protagonist was more likeable, really.

It’s also very relevant to the problems of aging today – how do you balance your independence with your aging and the need to have elder care? The main character, Marcia Elder, decides to advertise for a companion and gets one with decided opinions. As Marcia has her own opinions (but tends to keep them to herself), the story turns into more of a “coming of age” event as well, although of a different kind.

Elder’s growth comes through learning to stand up for herself (even in the face of impressive opposition). It’s a good story, and there were some fantastic descriptions of life in Vermont. It’s also very expressive in its depiction of aging and all that goes along with that stage of life. (”The Southwest Corner” title refers to the corner of most houses facing a certain way when the elders of the family would live in the southwest corner as that had the most sun and was warmest in the long winters.)

Walker was quite surprising for her time – she graduated top of her class from Wells College in Aurora, NY, in 1926, and went on to earn her Master’s degree in English Lit from the University of Michigan. She and her husband moved to Montana in 1933 and that’s when she started published her books.

It’s interesting, to me, to consider her life out on the plains in rural Montana as she sat in the car writing and waiting for her husband to complete his house calls. I wonder what her career plans would have been if she had lived in a later day and age when gender roles were more flexible than they were back then. Interestingly, when her hub died (in 1955), she moved back to Wells College and became a professor of creative writing, and in 1960-1961, she was a Fulbright Lecturer in Kyoto, Japan.

I have enjoyed reading Mildred Walker’s work and will pick up more at a later point. Thanks to whoever it was who pointed the way to her. I appreciate it.