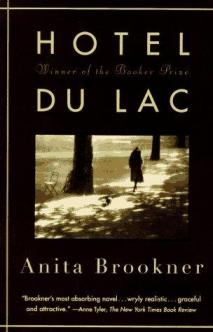 “The beautiful day had within it the seeds of its own fragility – it was the last day of summer.” Anita Brookner, Hotel du Lac

This was a reread, and I had quite forgotten how quiet and unassuming a novel this was. I had also forgotten what a wallop it packs right at the end once Edith realizes what marriage to fellow hotel guest Mr. Nellis really would mean to her.

It’s a fairly typical Brookner novel (which is not to downplay that in any way): single/unmarried woman who is a bit frumpy fashion-wise (and risk-taking wise) and lives alone. One of my friends describes Brookner books as being “beige” and I think that is a pretty accurate description – a muted color, muted characters, and an understated plot. This has great descriptions of the lake and the hotel in Switzerland at the end of the season. Not much rain until the end, and I wonder if this is a foreshadowing of the sea-change that Edith undergoes towards the end when the fogginess of her life clears up: she recognizes Mr. Neville for what he is, she recognizes her real relationship with David is going nowhere and the downpouring of the rain (at the end after days of mist) could be arguably symbolizing the cleansing (or refreshing) of the protagonist who has been mired in the mists before now.

Edith as the protagonist is middle-aged, drab and single and has been sent to the hotel as penance for something that she did that her closest friends and family see as dire. The incident is hinted at early in the plot but not fully explained until closer to the end, so it does leave you guessing the details. Edith is a professional writer of women’s novels whose own life has started to reflect the lives of her own fictitious characters. She admits that she is good at writing up fictional women’s lives, but is not feeling adequate to handle her own.

Apart from Edith, there are other memorable characters in the book – Mrs. Pusey and her beautiful and unremarkable daughter Jennifer (wealthy and self-centered), Monica who has an eating disorder and a lap dog (poorly trained), the elderly regal but lonely Mme. De Bonneil and even the hotel itself – a perfect foil to reflect the characters – memorable in its own way of being unremarkable with its drab surroundings inside the hotel contrasts with the beauty of the lake and the outside. The quiet environment balances the external calm of the hotel guests with interior lives and thoughts that are full of turmoil with the drama of relationships between the staff and the guests. Perhaps it’s the contrast of natural beauty with the superficial beauty and lives of the women (and the few men).

This was a lovely read – much more in-depth than I had realized on my first reading. Plus this Vintage Contemporary edition used a great font and its pages were just right. Loved it.