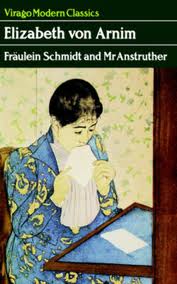 Being an ongoing fan of Elizabeth von Arnim’s writing, I had read quite a few reviews of this epistolary novel on-line, and thought it’d be a fun read. It was – it was also quite a bit more serious overall than I had been expecting, but that’s not a criticism at all. Now, having completed it, my overall opinion of this novel was that it was a perfect balance of emotions and a very real consideration of how relationships can evolve over time, whether you want them to or not. (Plus – there are occasional sharp instances of wit sprinkled throughout the book.)

As mentioned, this is an epistolary novel but only from one perspective. It’s a collection of letters from the forthright Rose-Marie Schmidt, a young German woman with whose family Roger Anstruther, a fairly well-off English young man stays as he completes language lessons from Rose-Marie’s grumpy father. Rose-Marie’s mother, now dead, has been English and so in many ways, Rose-Marie considers herself English. (She’s a little too emotionally honest to be a true English person though. ) 

I know no mood of Nature’s that I do not love—or think I do when it is over—but for keenness of feeling, for stinging pleasure, for overflowing life, give me a winter’s day with the first snow, a clear sky, and the thermometer ten degrees Réaumur below zero.

Just before Roger leaves their house to return to England, the reader learns that the pair had confessed their love for each other, but due to class differences et al., they had sworn to keep their love secret until Roger has told his father. The structure used by von Arnim to only show the letters of Rose-Marie to Roger (and not his replies) works extremely well as you, as the reader, become much more aware of how one-sided the relationship is at times.

Rose-Marie is a literate and eloquent writer, who has been raised in a small town in Germany to be honest and plain-spoken. Her mother has died, her father is a grumpy SOB and together, they have a good-natured housekeeper with a boyfriend who is a keen (but poor) trumpet player. (One of the strands of the plot reveals that the family ends up having to ask the boyfriend to leave the trumpet at home when he visits his girlfriend, the maid. The trumpet playing had turned into a very loud reflection of how their romance was going, and when it was going downhill, it got very noisy!)

Just like the protagonist of “Elizabeth and her German Garden” (1898) and the women in “Enchanted April” (1922), Rose-Marie is witty and clever academically (although with little chance for continuing education apart from books). Although she is portrayed as something of a rural outsider, she is emotionally intelligent, much more so than Roger, and it is she who really holds the reins of their friendship right from the beginning (once the blossom of young love has faded).

She is a few years older than Roger, and once their engagement fades, she takes on the mantle of being an older sister type for him, telling him details of village life and proffering him advice about life. (As we are not privy to Roger’s perspective, we don’t know how he receives this, but the correspondence continues so it must have been acceptable.)

Papa was delighted, I must say, to have had at last, as he told me with disconcerting warmth, at last after all these months an intelligent conversation… (when Mr. Anstruther pays surprise visit to house in Jena)

Rose-Marie is not the traditional wilting heroine of the literary world. She is independent, she designs her own life in her own way (only limited by money, really), and she has a caustic wit which surfaces frequently throughout the novel. I really admired her no-nonsense approach to the impractical Roger and his roller-coaster emotions, and so when I came to the end of the book, the ending was perfect for how the story and the characters had been built. I turned the last page and sighed with satisfaction. That good.

Just loved this one, and it’s available on girlebooks if you’d like to read it.