Called “the greatest of all American urban novels”, Dreiser’s Sister Carrie was a good read and I really enjoyed it. It’s not a “happy” read or a “feel good” read, but the narrative arc is strong and the writing was fine. (Dreiser has been criticized by some as having writing that is not sophisticated enough, but I thought this was fine. After having read some drivel lately, Dreiser was a pleasure to read. This was very character-driven as a story, and this was perfect for what was happening throughout the book.)

Sister Carrie is basically the story of Carrie Meeber, a young girl raised in a small rural town who moves to Chicago to chase big-city dreams. You’d think that as it was written during Victorian times, that it might be a heavy-handed morality tale, but it’s not. People do iffy things, but there is no come-uppance for them or even redemption for them to change their “evil” ways. Life continues just fine and in fact, Carrie (she who didn’t fit the Victorian moral code of the time) even thrives despite her unconventional choices in life. (Probably made some of the audience get vapors!)

It is this immorality, if you’d like to call it that, which really irked people when this novel was published. Dreiser has been called one of the first American writers of the Naturalist/Realist school which shocked the socks off of the turn-of-the-century American readers and publishers when it came out. 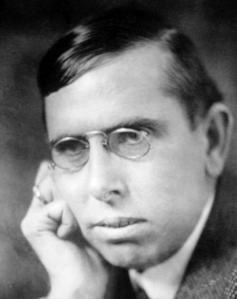 His storyline was one of the first published U.S. novels that described a woman being supported by a man to whom she wasn’t married (and was living with), and then when she leaves that partner, she hooks up with another man who’s already married and starts to be supported by him – all with little consequence. When the second partner (who’s already married) commits an impulsive crime, they both end up on the run and yet, when they land up in New York for a new life, there is little punishment for Carrie’s actions. (And you know how the Victorians loved their characters to have punishment for poor choices/rewarded for good ones idea, especially for the weaker sex.)

Trying to get Sister Carrie published at first was tough. A wife of a potential publisher read the draft and called it “too sordid” for them to work with, and only 450 or so copies were sold when it was later published. Years after the book was published, Sinclair Lewis said that the novel “came to housebound and airless America like a great free Western wind, and to our stuffy domesticity gave us the first air since Mark Twain and Whitman” (1930 speech.)

And it was a change on many levels and quite shocking to readers. Nothing bad happens to the woman for her life choices, AND she doesn’t learn to change her ways (no redemption) AND she works in the shockingly free world of theater. She’s not that happy, but she’s not punished. Goodness me.

This sounds like a bit of a depressing novel, and it’s not a happy story by any means, but it is a good read. I loved how Dreiser portrayed Carrie without stereotyping her with a Cruella Deville personality. She’s young, ambitious with little useful work training – what other options were there, really, apart from working to death in a poorly paid factory job? Who wouldn’t want to improve their situation if they were in that and didn’t have that many choices open to them? I, for one, am not going to judge her for that.

However, a lot of the audience did judge her for that. His two male characters received a different reception: Drouet (first fake husband that Carrie lived with) and Hurstwood (second already married lover) don’t seem to suffer much at first when they invite Carrie into their lives, but in the long term, the latter certainly does.

His downfall from successful businessman to homeless vagrant is a useful foil for Dreiser to compare Carrie’s rising theatrical success (slightly clumsy but works ok), so perhaps the audience was ok with this man receiving punishment for his immoral ways. Drouet, the first partner, just peels off gradually with no negative consequences. Interesting how the different genders are portrayed – Carrie probably made the female readers very nervous when they read about her…

So – overall, a good read. (I think it qualifies for a Scary Big Book read at close to 500 pages, but as most of it was on-line, it wasn’t too scary length-wise. I think on-line is the way to read scarily long books from now on.) I’ll definitely be reading Dreiser’s other classic (An American Tragedy – pub 1925) at some point.