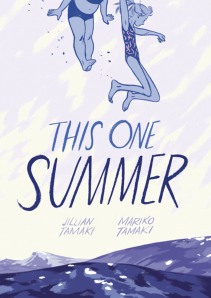 This was a graphic novel read and a title that I had picked up somewhere when I was cruising the interwebs the other day. I haven’t read a graphic novel for a while, and this looked to be a more cheerful title than most.

The plot focuses on two young girls, pre-teen/early teen age and one older than the other by a few years. They have spent several summers hanging out where their families both have houses by the lake, and so they have become close for the time when they’re together. Now one of them is getting older, the difference in ages has become more of a challenge as they’re at different points developmentally speaking. Both of the girls are also pretty different in their characters as well, so this was also a coming-of-age narrative (more so one than the other).

Previous years have seen the two girls hanging out at the lake doing lake-ish things like throwing rocks in to the water, digging in the sand, and playing games. But, in this particular summer, the older one is more interested in boys and all the teenage drama associated with them and so as the PoV is from the older girl, we see the differences highlighted between the two friends.

As the summer weeks progress, we see the older girl’s perspective on fairly normal events that happen. The annual trip to the historical reconstruction event put on by locals is now a bit lame and boring, her parents are fighting a lot, and she is at the age where she is embarrassed by having to hang with them a lot and lonely – the typical teenaged angst.

What I enjoyed about this tale, angst-y though it sounds, was that it just followed the few weeks of this family vacation in close detail. You could see how torn she was between wanting to keep the old memories going and wanting to be more grown up (like hang out with boys, the awkwardness of making new friends and being mortified/maintaining the friendship of her suddenly much more immature friend). The two authors have described those feelings perfectly through the words and pictures of this story.

The plot also was much deeper than I had expected. The two girls do the typical happy-go-lucky summer activities, but there is also a deeper and more serious plot line running in parallel. The local older teenagers are hanging out at the local convenience shop, and the girls long to join in with them except the older teens reject them for the most part. Trouble happens within the teen group and the two girls try to work out what’s happening around them, but the two worlds are not connected until closer to the end when a dramatic event occurs which grounds the girls in reality more than they had been, showing them that getting older is a bit more complicated than they had realized.

The pics were well done – lots of blue color (since it revolves around a lake with lots of swimming and other water activities) and a floating ethereal feeling of how fleeting summer months can be for you at that age. The one thing that tripped me up, picture-wise, was that the pics were not always tracking with the story line, and it was tough to link a few of the wordless images with the plot. There were times when it wasn’t clear to me, as a reader, whether the girls were dreaming at the same time or whether this was more of a representation of their scattered thoughts at that moment. It wasn’t all the time and it wasn’t frequent, but it was slightly confusing when it happened.

But overall, this was an interesting graphic novel that explores an endless summer at the lake when you’re right at the cusp of leaving childhood and becoming more adult. I enjoyed it.