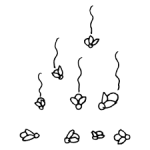 In the past month or so, it seems to me that life has taken a turn to be extremely busy, both at work and play. (This is not bad at all – it just seems that I have much less free time than I used to have.) Whether it’s true or not (and whether I have actually perfected the skill of “piddling around” to a new dangerous level), this is the perception that I have.

Such business also means that I am becoming a lot less tolerant with books that don’t strike a high note with me, and in the past few weeks, I have been hitting the Mother lode of DNFs. (I honestly feel that it’s not the books’ fault most of the time. More me being extremely picky and deep in a reader’s block or something.)

On the sunny side, all of these titles were on the TBR pile (and several had been there for YEARS), so this was good at clearing space on those shelves. I really must go through my shelves more often. Who knows what other treasures are hiding there?

2 thoughts on “Dropping like flies — My DNF pile of Doom”