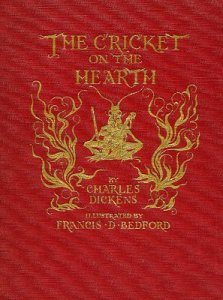 I’d been interested in reading some Dickens for quite some time, but wanted to give “A Christmas Carol” a break. (Don’t want it to lose its special with too many readings.) So, wandering around the library shelves, I came across a small collection of three Christmas novellas that Dickens wrote in the mid-1800’s, all of which were originally published as books (not as a serial in a magazine, as I had thought before.) So – it was a cold night the other day and I snuggled in with Cowboy and a fire playing on the DVD player – one does what needs to be done to make it nice for oneself, yes? 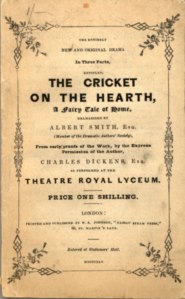 I have not read Dickens for quite some time, but I do enjoy his works. I just hadn’t heard of these stories before (apart from reading in a shopping catalogue that “all English homes have crickets on the hearth” when they were trying to pitch a small metal cricket in its wares.) They were really nice tales and very Dickensian full of characters with names like Mr. Peerybingle and Tilly Slowboy.

The first one, The Cricket on the Hearth, was written in six weeks and similar to “A Christmas Carol” in that it’s pretty domestic and divided into several small parts (these called “chirrups” instead of “staves”). “A Christmas Carol’ had been published two years before, and was the first of Dickens’ Christmas books (or so says Wiki), so there are some similarities. One notable difference between the two is that The Cricket… remains light and domestic, avoiding any mention of difficult or disturbing social issues. It’s also been argued this work is less Christian that his other Christmas books… (When this book was adapted for a play and played in Russia, Lenin reportedly walked out of the play calling it “too sentimental” (which is a valid criticism, but that’s what Victorians loved at the time so his contemporary audience would have been happy.)

One interesting note is that The Cricket… features a sight-impaired young woman at one point. In Victorian society, disabilities were believed to be inherited, and thus it was not generally socially acceptable for people with disabilities to marry anyone. Writers of the time tended to utilize disabled characters as tools to build tension in a narrative arc as it was assumed that they must be kept from falling in love and then getting married. This character is also thought to have been based on a true life girl that Dickens met in the Perkins Institution for the Blind in Boston, MA, and who is mentioned in his American Notes work. (Just out of curiosity, has anyone read this? What did you think?

The next novella in the collection was called The Holly-Tree and is a fairly straight-forward narrative of what happens when one character is stuck at an inn when he is traveling from London to Liverpool one winter – a long way in those days. (This is a very snuggly tale if you’re looking for one.) Nothing too deep and meaningful (the usual redemption model), but very well written and just fun to read.

(An aside here that I dug up on-line was in the U.S. at the end of the nineteenth century, there was a group of restaurants called the Holly Tree Inns which operated as non-profits, serving meals (but not liquor – the drink of the devil!) and focused on reaching working women who wanted “substantial food at cost prices” – all funded by the wife of a large Boston publisher who, it is thought, heard Dickens read The Holly-Tree story and was touched by the “warm relationships that cross class divisions”.)

And then the final novella in this collection was The Haunted House (1859) which has an interesting history behind it. It’s called a portmanteau story (and thus, in this case, refers to a story with multiple parts), and for this one, Dickens wrote the starting and the ending chapters (stories, really) with other stories by other authors in between (authors such as Wilkie Collins and Elizabeth Gaskell); however, only the Dickens’ authored stories were in this collection that I read. So – basically, this is a Victorian haunted house set up. A small group of friends all stay there for a while to find out if it’s really haunted or not (very similar to a Scooby Doo episode), and at the end, they all get together on Twelfth Night to share their experiences.

Again, a pretty easy going straightforward narrative, but still fun to read if you’re in a Dickens mood. (And, in case you’re interested, “The Haunted House of 1859” is/was? one of the attractions at Dickens World in Chatham, Kent. Does anyone know if this place is still open? I heard that they went into bankruptcy earlier this year… Or even better – has anyone ever been?? 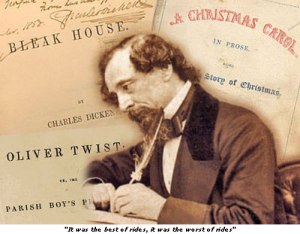 Credit unknown (but if anyone does know, just let me know and I’m happy to fix that.)