Here’s a quote from an early 1950’s Life Magazine trying to convince women to give up the best war jobs now that the men had come back and women should really be back in the house now (or only in certain jobs suited to her female constitution):

“Household skills take her into the garment trades; neat and personable, she becomes office work and saleslady; patient and dexterous, she does well in repetitive, detailed factory work; compassionate, she becomes teacher and nurse.” 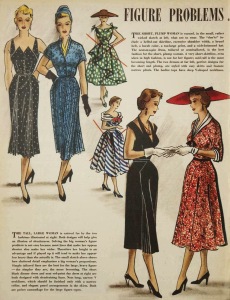 With current fashions having a focus on Mid-Century Modern (or MCM) – furniture, fashion, cars etc. – it’s interesting to look at how the U.S. really was back then, politically, socially and others. It seems to me that the decade has been idealized somewhat or perhaps that people have this large stereotypical image of how life was back then when it was really much more complicated than martinis and cigarettes. This book addressed some of these issues from the perspective of how it impacted the women who actually lived in this time. It was really fascinating.

The 50’s had a lot going on, worldwide, and the U.S. was smack in the middle of the Red Scare and the arms race between U.S. and Russia. Add to that set-up a frenzied fear about being infiltrated with Communism, and the country was smothered in paranoia on several levels: uppity women who weren’t always satisfied to go home and be a good wife, returning military men (mostly) who had been exposed to radically different viewpoints and now brought that back to infiltrate American communities, the government idea of the Soviet Union taking over the world, the civil rights movement just starting…  and it all turned into a rather weird time. 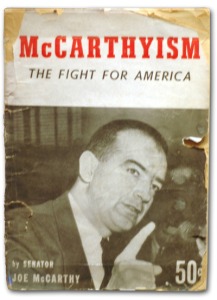 Harvey, the author, brings up an extremely interesting perspective on this world view, comparing the nation’s political perspective of containment (i.e. keep the Communists out and keep the “American” way of life in) to the societal containment view of the role of women (i.e. keep women out of the workspace and keep women in the domestic arena). It’s as though everyone was very uncomfortable with anyone getting out of their boxes while, at the same time, everyone needs to stay to their allocated historical place in the world.

As American servicemen were still returning from tours overseas from WWII and Korea, women were expected (and sometimes forced) to give up their independent lives (and to hand over the jobs that they had been doing just fine) to the returning troops. That was the patriotic thing to do and the right thing to do, and if anyone didn’t conform to that pattern, then it was seen as almost dangerously rebellious by the Establishment. Quite a few women who had been working were not happy having to go back and try to fit their former lives into a very small box just because people (mostly men) said so. Obviously, this led to a few problems.

The majority of women settled back into their routine, but some didn’t, and these are who are the book focuses on – oral histories of women looking back from present time (well, the 1990’s) to their younger selves and the decisions they made. It was clear that this forced domesticity, if you will, did not sit well for all, and as I read some of the recorded conversations in this book, the common theme was one of regret of chances not risked and paths not taken. 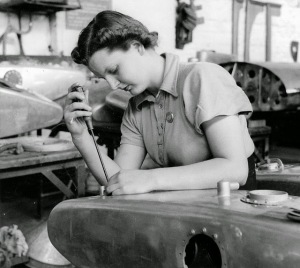 Women had been working for many decades, and with two world wars under their belt, the American women knew that they were capable of working many jobs usually considered only to be suitable for men. However, society was such that the expectation was that the women who worked in these formerly unsuitable jobs were temporary and should return to their domestic lifestyles once peace arrived. Women knew that there were jobs out there that would be workable and were not necessarily the usual format of nurse/teacher/shop assistant/menial factory worker, and yet so many elected to fit themselves silently back into their reduced roles post-war. And this is what the book reports: the featured modern older women look back on their younger selves and ask themselves “why?” Why did they give up their foothold in the men’s worlds?

It’s interesting to think about: what would you have done if you were a woman in the 50’s in this set-up? Would you have gone back and fit the accepted mold: college degree/wife/home/children? Or would you have been brave enough to break free and do your own thing? Several women in the book did exactly that, but faced friction almost everywhere, both from men and women, in their early careers. Most continued with their careers and ended up doing just fine, but imagine where these pioneers would be if they hadn’t had to overcome these obstacles. (And the same question would clearly fit with other disenfranchised groups throughout history as well.)

Anyway, as you can see, this book set me off going down several trains of thought and was a fascinating read. Not every woman regretted what they did – some were very happy to remain in the domestic role – so there was a good mix in the book. I have another topic related to this book which I’ll chat about next time, but I’ll keep this post a manageable length. Obviously, this was a good read in that I’m still thinking about it days after.