It’s been unusually snowy for the last few days here in West Texas, and since it is rather infrequent for our area, that means that workplaces tend to veer on the side of caution which, for me, meant a SNOW DAY for the entire university. I don’t know about you, but for us here, an entire snow day is almost unheard of and thus there was much rejoicing across the city when this news was announced very early that morning.

(And here I must beg understanding from those of you who have been piled under huge snow drifts for most of 2015. We probably only got about 4”-6” and some drifting but when you don’t get much, it’s Snow-pocalypse.)

And so these unexpected free hours have been spent wallowing in books (naturellement) and in graphic novels in particular. The library had had a graphic novel display last time that I had visited and there were quite a few titles that I hadn’t seen before and which looked interesting. And thus, the link between snowflakes and sequential art (another name for graphic novels, which, to be honest, seems like another name for grown-up comics – “grown-up” not in a naughty way but in a not-kid-like way.) 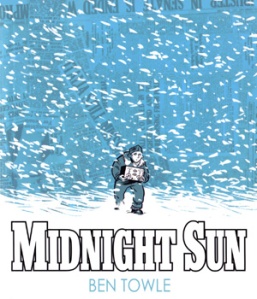 First up on the pile was a small book called “Midnight Sun” by Ben Towle (2007), a GN story that was based on a true historical event in 1928 when an Italian airship crashed in the Arctic on the way back from a trip to the North Pole (an event that I’d never heard of). The group of survivors was composed of men from European countries and theirs was a rather harrowing journey of survival (as were others around that time and before). I am not sure how much of the story was true (apart from the actual crash), but the story seemed pretty non-fiction without any magical realism elements in it and seeing as it featured snow in a starring role seemed an a propos title to start the read. Overall, this was ok but nothing too amazing. 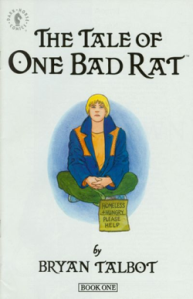 Next was an English GN called “The Tale of One Bad Rat” by Bryan Talbot (1995), an author/artist who has done work with Neil Gaiman, another author out there. This title was more reality-based (but still fiction) that dealt with a young English woman who runs away from her home to escape ongoing childhood sexual abuse. So – not an easy read, but handled well. The protagonist has a pet rat that she rescued from her school lab and so they’re both on the run from horrible lives. Although this story ends in the way you’d expect it to, it was still a great read (despite the horrible issue) and was very well done. I thought Talbot nailed the slightly gritty side of England really well, and that was refreshing to see. So – this was a good one. 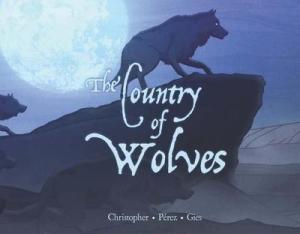 Third up was a GN titled “Country of Wolves” by Neil Christopher/Ramon Perez (2013) and this may have been good, but I didn’t get that far as it was far too scary for me. :-} It did come with a CD of the short animation film of the book, but again – too scary for this feeble creature.

And then I pulled out my old Raymond Briggs (UK author) but I’ll save those for another day. 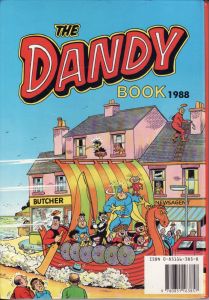 And, to finish up, I really did read some comics as I happen to have a 1988 Dandy Annual (featuring old chestnuts like Desperate Dan and Korky the Cat) and which was actually groaningly humorous in places. We all three kids would get Saturday morning printed comic books of Beano, Dandy, and Beezer and there would be much sharing to make them last longer. (More of the explosions and accident humor of 1950s Tom and Jerry cartoons than the gentle comics of nowadays, and yet we survived to live the day…) 🙂

This was a fun way to spend the day, and thanks to the Weather Gods for providing us with a nice snowy day.