So – time for a general catch-up with reading and life in general. Work continues at warp speed and so I’m still not quite back to full-tilt reading, but I’m reading when I can.

I’m in the middle of a fantastic read by Gerard Woodward (whose book August I loved and reviewed a while back). His publisher got in touch with me about his newer title, Vanishing, which is great and I am finding that I look forward to every moment that I can find to read that story. More in-depth review to come, but suffice to say, Woodward is a great author! 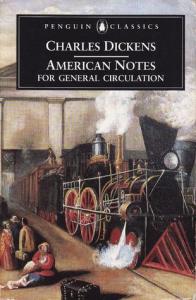 I wanted to read another classic (specifically by Dickens), so I picked his non-fiction travel writing about his first visit to America called (strangely enough) American Notes. Well, I’ve heard Dickens’ writing called a lot of things, but truth be told, this book is actually very very funny in parts and has frequently made me laugh out loud when I’m reading it at the gym. I had no idea that Dickens had this dry sly sense of humor, but he does and there’s plenty of it in this book. There are, I admit, a couple of chapters which are heavy-handed (typical Victorian) writing about the state of prisons in the U.S., prison reform, slavery and disability rights, but they’re not too long and he did have a point. (The prisons were dreadful at the time and Dickens was a big advocate for changing that – especially solitary confinement – and the justice system in general.) However, once he returns to the world of travel, the tone returns to very witty commentary about his journeys. (Honestly, if I was a betting person, I would bet that Bill Bryson has read this Dickens book at some point because they both take the same tone about traveling around. If you like Bryson, you’ll like this particular Dickens. Just don’t be put off by the prison reform bits. The rest of it is really pretty funny for the most part.) Anyway, longer review to follow, but this is a good travelogue of early American life. (WARNING: It’s not always complimentary towards America/Americans but it does have grains of truth to it.) 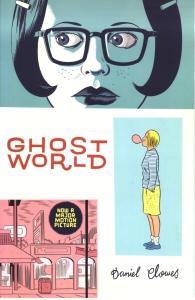 Did a quick read of the graphic novel bestseller called Ghost World by Daniel Clowes. Not one of my favorite reads as both of the two lead characters are hard to like, swear like sailors and have an extremely jaded approach at life. I know a lot of people really like this read of these two disaffected teenaged friends, but I rather wish that I could take that hour of reading time back to use on something else. But it’s good to know what people are talking about when they mention Ghost World now.

When I haven’t been reading, we’ve caught a couple of really good movies. “This is Where I Leave You” is a movie adaptation of a novel of the same name by Jonathon Tropper (both good). (My book review is right here.) The plot focuses around a family of adult children and mother who all share close quarters for a week as was the final wish for their newly deceased father. It’s poignant and funny, and I think it’s one of the most honest representations of what life would probably be like if grown-up siblings were forced to spend a whole week together after years of having their own independent lives. Bitter-sweet and an overall really good movie. 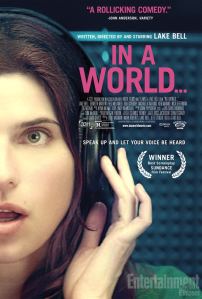 Another movie we viewed was an indie flick called “In a World”, fictional drama about the world of high-level voice-over artists vying for a gig doing the voice-over for the trailer of a huge blockbuster trailer about to be released. Again, grown-up siblings closely interacting, their lives not running according to plan (because whose does, really?) and some very sly humor. Not a comedy, but more of a poignant drama which was extremely satisfying and will be added to my list of top ten fav movies. (As will the Tropper movie above.)

Still watching the fantastic series, “The Wire” – wow. Talk about unpredictable plot twists and now we’re in Season Three, we’ve got a strong background in the characters and who they are etc., so it’s always a good watch. Good for when you want a serious hard-hitting drama and a nice replacement for House of Cards (although a very different take on the world).

And it’s been raining, raining, raining a lot for this semi-arid place we live in. It is the rainy season, that’s true, but this has been a chilly and wet start to summer for these parts. Next stop: Home Depot for ark-building materials. (Certainly not complaining about the rain though. We need the moisture in these here parts.) 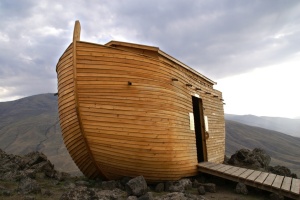