…Was a lot of fun, so thought I’d put some photos up to show some of the sites that we passed.

As none of us had been to Vermont before and as we were all arriving from different far-flung places across the globe, we started the trip landing at Burlington Airport in one of the state’s larger cities. Didn’t see a great deal of Burlington, but I had a rather late arrival so after chatting a bit (and finding our first set of rocking chairs*, we went to the hotel and bed. (I had no idea that Vermont was so close to Canada! Hmm. Learn something new everyday, right?)

We tootled around Burlington the next morning, with a must-see (for me in particular) being the huge Lake Champlain. In Texas, it’s rare for me to see any large bodies of water, freshwater or sea, and so it’s always very high on my to-do list when I travel to places that do have one of those. So we took a ferry tourist ride around the lake, which was interesting and refreshing and a really fun way to spend the day (especially as all three of us had traveled across multiple east/west time zones to get there). 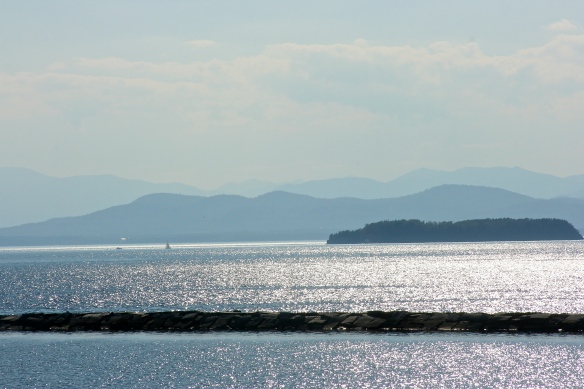 The next day, we went to the Shelburne Museum which is a huge ranging historical place with authentic buildings that have been moved (in some cases) from elsewhere and then filled with artifacts anywhere on the spectrum from modern fiber art (e.g. art quilts) to sixteenth century kitchen tools and a covered bridge. (The covered bridge was outside, of course, and was interesting in and of its own right. We’d never seen one before, so found it to be an interesting experience. Are the bridges covered due to the frequency of severe cold weather events in Vermont?

One of the buildings at the Shelburne Museum…

Inside one of the old covered bridges that are scattered through Vermont (and other states?) 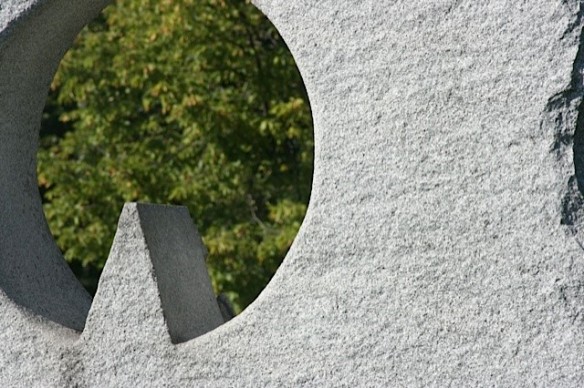 My (rather small) mum sitting in a (rather big) chair at the Shelburne Museum.

Anyway, highly recommend a visit to this great museum if you’re in the neighborhood. It was really a fantastic place and we ended up spending most of the day there. (Of course, we found some rocking chairs to sit in for some of the day. 🙂 )

We also visited the really well curated Robert Frost Interpretive Trail run by the National Forest Service and set in the middle of the Green Mountain Forest. There was a beautiful winding drive to and from the trail, and then, during the walking trail at spectacular scenic overviews, there were signs with relevant Frost poems written on them, and this was a really interesting touch. Frost had spent some time living as a forest ranger in this particular forest, so it was interesting to see similar views to the ones he had seen. I also had no idea that Frost is quite a recent poet. (I had thought that he was very Olden Times, but he’s not really.) (The views were really great in and of itself, but with the addition of poems, the trail breaks became a cultural tour as well. Well played, National Forest Service, Well played.)

More booky photos next time. Suffice to say, that this was one of our family’s favorite trips. Thank you, Vermont!

* One of the ongoing themes of the trip was searching for three or more Adirondack rocking chairs. I don’t know what came over us, except that it was really fun to spot them and go and commandeer them for a while. 🙂