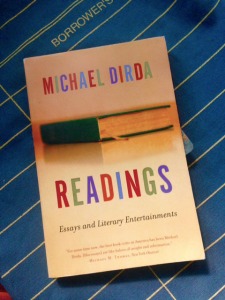 Having just finished up Michael Dirda’s book of essays about books, I feel quite bereft for several reasons, really. One is that no matter how hard I try, I will not reach his level of literary achievements – He seems to have a familiarity with every title out there, no matter how far back you go. Second – he writes extremely well about what he reads (without a trace of boasting about the sheer numbers), and three, he’s been awarded the Pulitzer Prize, and finally, four, he seems to be a nice all-around guy.

In case you’re not up on who Dirda is, he is the Washington Post’s Senior Book Critic and he has a Ph.D. in Comparative Literature from Cornell University.  He’s also incredibly well read, and I’ve dipped into his erudite blog (now defunct), but you can see more of his writing via The American Scholar’s Browsing column. I’ve enjoyed almost everything I’ve read by him so far. I own three of his books (Readings (2000), Bound to Please (2005), and Book by Book (2005)) but have only read this title so far. (Read quite a few of his columns though.) However, he definitely meets the self-determined criteria of one of my famed literary dinner party guests. (Guests so far include Nick Hornby, Robert Lacey and Dirda. Hmm. I clearly need to balance up the table a bit in terms of gender and POC… I’ll work on that.)

Basically, this book is a collection of essays and columns from his writing at the Washington Post, and in the same vein as Nick Hornby (except a little more elevated, one might say). Hornby’s easier to read and pretty funny, whilst Dirda is much more scholarly and serious. Both are good in different ways – just depends what you’re in the mood for, really. Just be prepared to add oodles of titles to your TBR list.

So this collection covers a wide range of topics, from the challenge of getting his three young boys to read more to the writings of Sophocles to the book-buying adventures in which he engages every now and then. As a bookie person, I really enjoyed each column but must be candid and admit that there were quite a few titles of which I had never heard. (Boy – he seems to have read everything and remembers what he read as well!)

I particularly liked his quote about traveling:

“A good rule of thumb is: Pack twice as many books as changes of underwear.”

Sounds rather sensible to me.

So – if you like books about books, or reading about books, and enjoy adding five million titles to your TBR, then I highly recommend Dirda’s columns. I really enjoyed this read, and now moving the other two titles up the pile a bit. (Want to spread them out a bit so I can look forward to them. Plus he has a new title coming out in 2015. Joy.)