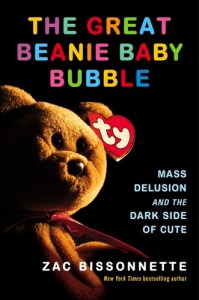 This was a whirl of a ride learning more about the craziness that was the Beanie Baby trend during the 1990’s. I wasn’t a part of that trend, but I certainly watched as people quickly spent their kid’s college funds and their life-savings to buy Peanut the Blue Elephant or one of the other beanbag plush toys on offer. (As I think about, I think I might have a BB hanging around from a gift. I’ll have to look.)

This book goes more deeply into the Beanie Baby world of creator Ty Warner, a force unto himself. He had a horrible childhood and this unhappy start to his life led him to a mostly unhappy life, at least according to this book. One would feel very sorry for him except that he seems to be a very unpleasant person in both his personal and his professional lives.

Now that I’ve read this book, I have a better understanding of just how the Beanie Baby Bubble happened and the mass delusion that it caused to a whole group of people who turned these soft toys into commodities instead of just toys. (Bissonette reports that it’s usually a problematic situation whenever adults start to collect the toys more than kids.) 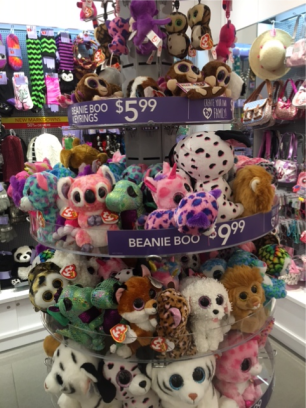 In retrospect and when some of these former collectors in the book look back at that time, they seem to be puzzled and slightly embarrassed about the whole thing. (I didn’t really have that great an understanding about the craze until Bissonette compared it to the seventeenth century bubble with tulips.) It seems that the craze evolved out of a perfect storm of events: the internet bubble had just burst, the country was feeling economically content, and people had more disposable income in their hands – all ready to spend it on something.

Ty Warner hit upon the beanbag toy craze, worked out an effective marketing strategy and sold millions of the furry creatures. As months passed, the Beanie Baby became a collectible and not something to be played with. (Remember the plastic tag protectors that were available?) The people who were buying the Beanie Babies were the kids’ parents (and they weren’t buying them for their kids).

When the bubble burst and the bottom of the market fell out, a lot of people had got themselves into a financial pickle (understatement) with their fuzzy mountains of Beanie Babies who were losing their value by the minute.

Bissonette is a good writer and treats the whole insanity with respect. There is no mocking of anyone or any mean comments about the people who got sucked into this world, but they are also not viewed with rose-colored glasses. Instead, it’s a cautionary tale for the people out there (and there are still individuals who have kept their hundreds of Beanie Babies to this day).

This was a strange journey to a strange place. The book was well written and presented, and was a good read whether you were into Beanie Babies or not.

BTW, I was at the mall the other day and there at the back of one of the stores was a display of Beanie Babies (now called Beanie Boos (?)) except these toys had the really big spooky anime eyes. I look at them with a new perspective now I’ve read this.

Note: I was curious and checked out ebay to glance at Beanie Babies there. Wow. There is a 1997 Princess Diana Ty Beanie Baby asking for $40,000. You know, if you’re interested.)