“While the hardware of civilization (iron pots, blankets, guns) was welcomed, the software of Protestantism and Catholicism – original sin, universal damnation, atonement – was not and Europeans were perplexed, offended and incensed…”

This was a fascinating read about the troubling history of Native Americans in both the U.S. and Canada and written by an eloquent English professor who is also Cherokee (and Greek, as it so happens) so it was a perspective that was very unusual for me. It was also so interesting especially after having learned so much about the U.S. historical background of African-Americans last month. There are a lot of overlaps unfortunately – not the same, but definitely some issues in common.

It was also interesting as I happen to live in West Texas which was/is the large original home for the Apaches, the Comanche, and the Arapaho, and so our local history is peppered with references to battles and treaties developed throughout time. (It must be added that the history tends to reflect a very one-sided perspective of things… Guess which one?)

(If you’re curious to know more about the Indian Nations of Texas, this is a good introductory site from the Texas State Library and Archives Commission. It’s much more complicated than a John Wayne movie, let me tell you.)

This title was actually more of a collection of thoughtful essays with the common theme of the history of Native Americans in Canada and the U.S.

Goodness gracious me – how this group has been mistreated by governments over the years. Coming as it does through the author’s eyes, it’s not a straight history but more of a conversation over coffee with the author, and I think that this worked really effectively as you, the reader, were exposed and immersed in the anger and frustration of the author as he reflects over the events.

One of the Native Americans at a local tribal celebration here in West Texas.

Essays covered a wide spectrum from how the early settlers set treaties with a particular tribe (and then broke them very easily) and this was a thread throughout the whole collection, really. It was tough to read the endless broken agreements over the years, and knowing this now, it’s more understandable to me how some of the Native American nations are mired in poverty, unemployment and other social ills.

One of the essays covered how Hollywood used the Native American and created a particular image for its own ends. According to the author, between 1894-2000, Hollywood made more than 300 movies featuring Indians (an accepted term for the author) as characters but rarely using a Native American as the actor. Producers were seeking “real” Indians and “authentic” Indian culture. To get a picture of the most frequent image of Native Americans for Hollywood, think of the well-known sculpture, “The End of the Trail” by James Earl Fraser in 1915. (See below.) 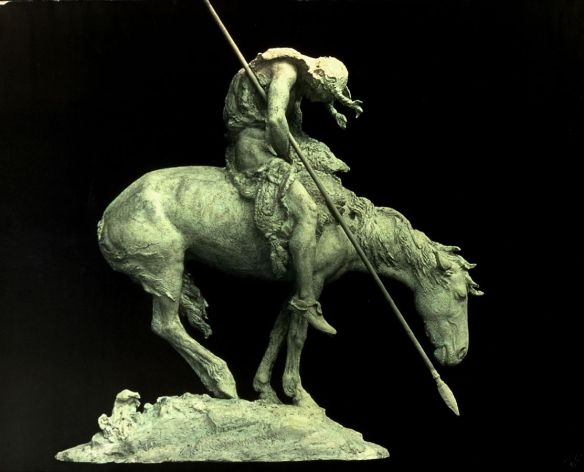 So – this was a powerful book that was really well written (although I would have like a bibliography). It wasn’t a scholarly book with footnotes or anything (and very openly reports that it’s not at the start of the book) , so through that lens, it really worked as a perspective of someone who has been in the trenches and knows of what he speaks. It was a fascinating look into Native Americans and their history.

One of the Native Americans at a recent tribal celebration in Lubbock, Texas.