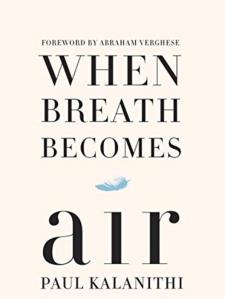 I had an amazing read of Paul Kalanithi’s autobiography called “When Breath Becomes Air.” Kalanithi was a young surgeon (aged 36) and in the final year of his neurosurgical residency when he received the troubling diagnosis of terminal lung cancer. He had none of the risk factors for this cancer, so it was totally out of the blue and arrived right at the time of his life when he’s just about to finish the arduous training and begin his “real” life of being a surgeon. He and his wife are both physicians so they know what the CT scans show, and when they hear that Kalanithi has about one year to live, what to do, what to do.

And so this short but powerful read is a meditation on what life means, both philosophically and in real life: Kalanithi is a philosopher as much as he is a surgeon and so this reads as more of an existential meander through those final months. It’s got the medical stuff in there, as well, but it’s more of an intellectual journey than you would expect, and though I am not well-versed in the old serious thinkers of yore, it was still an educational ride through this sad time.

As Kalanithi has received this terminal diagnosis, what does that mean for him (apart from the physical process of dying)? He mixes intellectual thought with thoughts of a more pragmatic nature (Which treatment should he have? Should he even attempt treatment at this point? What about having a child with his wife?), and so it’s a very thoughtful book best read slowly so you can digest what is being said.

Highly recommend this title if you’re a fan of physician authors such as Abraham Verghese or Atul Gwande – this is the same genre but a less straight-forward read due to philosophical questions Kalanithi addresses. This one definitely makes you think. (Or it did me, at any rate.)