And in one memorable sentence, Morley describes eggs as “hen fruit” which just cracked me up for some reason.

(Taken from The Haunted Bookshop by Christopher Morley (1919).) 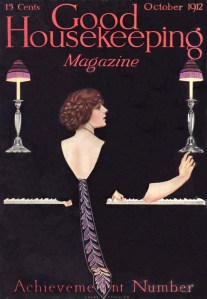 Example of work by Coles Phillips.