And another Monday rolls around… This week looks a bit busy at work, but I’m planning on keeping strong boundaries between the office and home life so that I can have… you know… a home life. 🙂

The weekend was fun as we went to a local play by the Hub Theatre Group. Called Disgraced, the play covers a lot of current affairs issues included Islamophobia and the huge question of identity. It was a really good presentation of some very complicated issues and although timely, was not too much in “in your face” to make the point. The director had also arranged for an inter-faith panel for audience discussion after the show which was really interesting. The only sad thing was that the people who I wish could listen to such a conversation weren’t there. However, the points raised were still important so I really enjoyed it.

If you ever get the chance to see this play (or any other local theater production), I recommend going. It’s a great way to support the arts in your local community, and generally speaking, the local actors will be acting their hearts out…

We also saw a different kind of acting (but still acting all the same) when we watched the hilariously bad (as in naughty) Deadpool. (Be warned it’s a bit rough around the edges, humor-wise, but it’s the sort of film like passing a car wreck – you know you shouldn’t be watching but difficult to take your eyes off it all the same. Loads of fast wit flying around (along with expletives), but if you know that going in, you’ll be fine. :-)) Be also warned that you may want to listen to Wham after this movie. (I can neither deny nor confirm that I’m listening to them right now.) Just sayin’.

Oh, and lots of heavy-duty naps. I’d been very very tired for the past few weeks so needed to catch up on some sleep. It’s a hard job, but someone has to do it.

Reading-wise, I’ve been finishing up some titles although I’ve been rather quiet about them. They’ve still be good reads though.

Hornby is a guaranteed good read (if you focus on his Believer columns) and I really enjoy reading his booky writing. He starts off each column with a Books Bought and Books Read column. What’s super impressive is that he actually reads one or two of the books he bought in that same month, a rarity in my life. (Interestingly enough though, this title was one that I bought and then read immediately. Go figure.)

So – if you’re looking for a lovely bookish read from an author who enjoys books as much as you and I do, pick thee up some Hornby. Be prepared for your TBR pile to have some additions though. (Another booky person is also Michael Dirda, but he’s a bit more serious for the most part. He’s also reading some rather hard books (classic-speaking) so not so accessible but seems just as nice.) 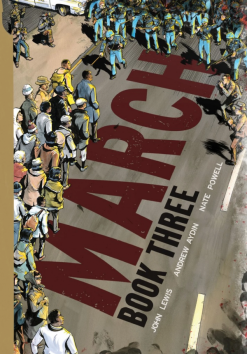 The final volume of the March trilogy which chronicles Rep. John Lewis’ journey during the early days of Civil Rights, and even if you think you’re pretty familiar with this history, look again as this graphic novel presentation puts a whole spin on things. It’s a fantastic “I was there” look at the whole strange journey (still going on in many ways), and it really demonstrates how hard the civil rights were to get (and then keep). I’m continually astonished at how terrible people will treat each other based on nothing more than skin color, and the fact that we still see it happening today makes me worry for the human race. (It’s not just an American experience, unfortunately, as seen during the recent Brexit palaver, but this graphic novel covered the U.S. events.) There were times when I found myself holding my breath during the reading of some parts, and the many many players in the civil rights era were extraordinarily courageous. I think that if anyone reads this graphic novel trilogy by Lewis, you’ll understand more about the Black Lives Matter movement (whether you are for or against it). Highly recommend it.

I’m slowly working my way through an interesting (but dense) non-fiction read on America’s contemporary frontier (i.e. the people and places who live out in the middle of nowhere). Living as I do close to the old frontier of the west, it’s fascinating to learn the history of such settlements that do live still in such inhospitable places. So, really interesting but slow-going for some reason. I think I just need to pick this up and put in a few hours of solid reading. I’ve been picking it up and putting it down and I’m not sure that that’s the best way to approach this read. Title: Miles from Nowhere: Tales from America’s Contemporary Frontier (Dayton Duncan) 2000.

And just picked up some fiction about the 1992 LA riots over the Rodney King beating: All Involved: A Novel of the 1992 LA Riots by Ryan Gattis (2015). It’s from lots of different characters’ perspectives (all of whom were involved one way or another) so I expect that they will all interweave as the story progresses. It’s really good so far, and reads like a hot knife through butter. (Or at least it feels that way after the frontier read!)

So – some reading going on. Just not very fast right now.

How’s it going in your life?

1 thought on “General Catch Up Time…”