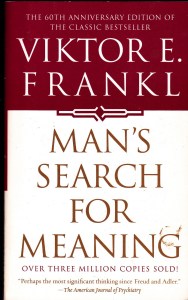 “He who has a why to live for can bear almost any how.” — Nietzsche

So, I finally picked up “Man’s Search for Meaning: An Introduction to Logotherapy,” Viktor Frankl’s mesmerizing autobiography about his time and thoughts when he was captured as a Jewish prisoner in Auschwitz, one of the most notorious concentration camps in Germany during WWII. I’d been meaning to get to this for a very long time, but I felt that I needed to psych myself up to read it as I know it was not going to be an easy time.

Now that I’ve finished it and can reflect back on the experience, I see that it was a tough read in both the subject matter and also the philosophical discussion that is in the second half of the book, but it was hard mainly because it was true – that people had treated each other in this manner. What. The…. ?

Viktor Frankl (1905-1997) was a psychiatrist and neurologist living in Vienna during the 1930’s when Hitler came to power and instigated the horrendous concentration camps that tortured and killed millions of Jewish people (and others) at the time.

It’s a time that I find incredibly hard to understand as it’s so completely removed from anything that I would choose to do (I hope), that there seems so little overlap between the life I choose to lead and the lives of the people who ran these camps. It’s easy to judge over time and distance, but I hope to god that I would have tried to stop this whole genocide if I’d had the chance, but who’s to know? The human condition is a strange one at times.

Back to the book: it’s basically a book in two parts, the first part detailing the three years of his life (and those of others) when Dr. Frankl was picked up and sent to Auschwitz, and then the second half, which is more of a philosophical discussion of how he made sense of the whole ordeal and came up with his school of treatment called logotherapy.

It’s an intense read, and if you’re feeling remotely sorry for yourself when you start to read this, I can almost guarantee that you will have your perspective shifted by the time you finish it. How could one compare the minor trials of life today with the lives of these prisoners who had *nothing*? Literally nothing.

It’s not an easy read, but how could it be when one considers that topic matter? What’s amazing is that anyone survived long enough to walk out of the camps when the final day of freedom arrived. (You’ll need to read Frankl’s description of how some of the prisoners reacted when the gates of the camp were first opened…. It’s incredibly powerful to read.)

So, Frankl discusses his ideas on the meaning of life for himself and others, and concludes that life has meaning to be found in every moment of living and that it never ceases to have meaning, even when one is suffering profoundly.

This is the concept of “tragic optimism” — that no matter how terrible life can be, it only ceases to have meaning when there is no hope for change in the future. Once the hope is gone, then life is over – that love is the ultimate and highest goal that (hu)man can aspire to.

To me, the book seems to be about the importance of deriving meaning from suffering – that one suffers only so that you should learn from it to be a better person and if one loses sight of that goal, then one is doomed. If one feels a sense of control over one’s environment, then you will fare better than those who are physically strong but do not have that sense, and the existential angst that people may feel at some point in their lives is due to the lack of personal agency they may feel in their lives.

I’m not sure. It’s hard to write about this clearly without babbling and sinking into a morass of blather, but it seems to me that perhaps the key to a good life is to serve others. If one looks outside oneself to help someone else, therein lies the meaning of life.

We who lived in concentration camps can remember the men who walked through the huts comforting others, giving away their last piece of bread. They may have been few in number, but they offer sufficient proof that everything can be taken from a man but one thing: the last of human freedoms—to choose one’s own attitude in any given set of circumstances—to choose one’s own way.

I urge you to read this for yourself and to draw your own conclusions. My vague personal ones are above, but I think this book is too important for you to try and draw your conclusions from my version of things. It’s a hard book, yes, but it’s an extremely important book and frequently in the top ten lists of influential books for people. It’s an astonishing read. Don’t miss it.