It’s been rather too busy for the last week or so, and so, some late working hours matched with attending all four graduation ceremonies this weekend plus having the attention span of a flea all add up to not very much reading for me, I’m sad to say.

And that’s ok, actually. Life is more than reading, sometimes, and it’s good to embrace other things now and then. So, there’s not that much to update you on wrt books. I have been picking up and putting down titles with abandon, and after rather too gleefully picking up a load of titles at the library last weekend, took them all back this weekend. I don’t know what I was thinking when I brought those home the other day. (Not only an optimistic pile, but also two 7-day loan books. Nuts, really.) Anyway, I think this week will be slower, I’ll have more head space for reading, and so I’ve been pulling together a (small) pile of titles for the upcoming week or so during the Christmas break. 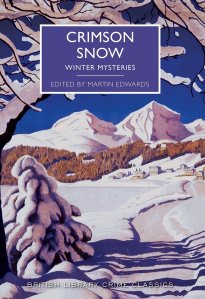 I can’t seem to remember all the titles off-hand now that I’m not at home, but I do know there is a collection of wintry mystery stories, Crimson Snow, edited by Martin Edwards and published by the British Library in their well-designed Crime Series. (There’s no sign of snow here, although we did have a slight sprinkling from the sky on Friday.)

I’m also trying to read a sort of fashion book, called Style Forever by Alyson Walsh. However, so far I’m not that keen on it and for a multitude of reasons, really, the most glaring of which is the appalling writing/editing that fill the pages. The never-ending grammatical errors and spelling mistakes are starting to annoy now – there were three in the first two paragraphs on the first page – so yikes. It’s also blindingly obvious in its advice, and the illustrations are terrible. (All the models have weird clothing and claw hands.) So, pretty sure that I’m not going to finish this. (I’m sure that Alyson is a lovely person, and this is not to denigrate her, but she is in the magazine business and so should probably know an editor or ghost writer or two.)

Alright, so talking about that title has moved it off my reading pile. Hooray for writing things out. And I’m honestly not sure what else is on the reading pile, so we’ll have to leave that discussion right there.

Moving on, we had a polar front move on down south over the weekend, and the temperature dropped 45 degrees in three hours on Saturday afternoon. It’s been very cold for us here in Texas (don’t sneer, people in the northern states), and so, of course, the kitties have been remarkably cuddly and loving indoors. DH’s brother came into town for a day or two, and so Nova Dog has been losing her mind and barking with her Outdoor Voice in an effort to control her environment. (She has not met the BIL before and thus is a bit freaked out by him. Well, she’s freaked out by everyone and everything, but especially this stranger in the house. The BIL leaves today, so we’re hoping Nova will calm down once that happens.)

And then as mentioned, I attended four different graduation ceremonies at the university where I work for the December graduates. I am the Staff Senate President, and to represent staffers who were graduating, I went to each ceremony as part of the stage party. (Ooooh. Look at me!.. 🙂 ) It was fun for the most part, but my hand was a bit sore after shaking with five million graduates (especially the Agriculture majors). However, I don’t bemoan a moment of it because for each of these graduates, this moment represents a culmination of hard work and they may be the very first ones in their families to ever have reached that academic achievement. It’s a big deal and you can see it on their faces and on the faces of their relatives. Very cool.

So, now I am hoping that this week is much slower, that I manage to get a couple of things off the to-do at work, and then just chill out a bit. This time last year, I was just about to have brain surgery, so the mere fact that I’m not having this this December is a huge deal in making Christmas much much better! (If you’re having to be in hospital, I hope you have great pain management and a very short stay.)

Not sure if the Christmas decorations will get up this year, but the spirit remains the same. Hope yours is intact as well.