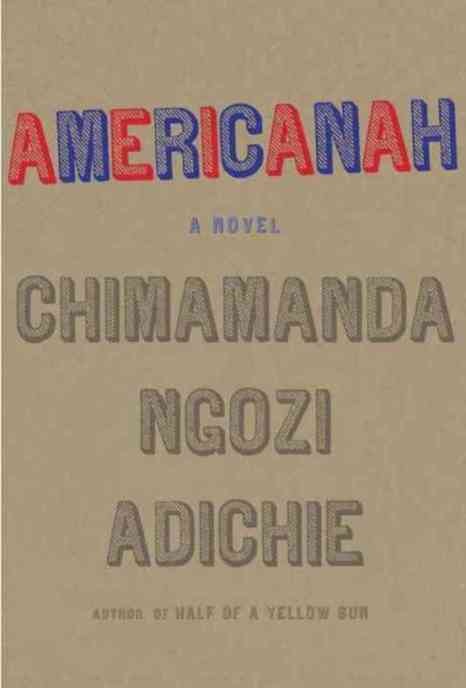 Wanting to read something that I couldn’t put down this Memorial Day weekend, I pulled “Americanah” off the library shelf, Scary Big Book though it is, and settled down on our new comfortable couch. Four and a half hours later, I emerged at the end of the book having been immersed in the world of two young Nigerians, Ifemelu and Obinze, as they traverse the uneven terrain of love and adulthood.

I was aware that Ngozi Adichie was an excellent writer (see review of We Should All Be Feminists here), but it’s been a while since I’ve managed to select a book that I couldn’t put down, and it’s been even longer since I’ve have had a few hours to devote solidly to an awesome read. Both of those opportunities came when I took the day off from work for the three-day weekend, and I have to say that although I’m only half-way through the year right now, there is no doubt that this title will make the Top Ten List at the end of the year.

Obviously, I’m not the only one to have noticed this book. It’s been awarded honors from across the world for writing excellence, including the 2013 National Book Critics Circle Fiction award, selected for the 10 Best Books of 2013 by the editors of the NYT Book Review, shortlisted for the Baileys Women’s Prize for Fiction (UK), and given the 2013 Heartland Award for Fiction by the Chicago Tribune. Even if the book hadn’t won all these awards, I would be writing the same gushing review so please don’t think that I’ve been swayed by all these accolades. They are completely and wholeheartedly deserved by Ngozi Adichie.

To the book itself: the plot follows the lives of two young Nigerian people, Ifemelu and Obinze, as their paths interweave and separate over the years and across geopolitical lines. Both grew up together in the same time and at the same secondary school, but Nigeria (at that time) was under military rule which meant that a lot of its citizens wanted to leave for elsewhere and other opportunities. Ifemelu departs for the U.S. to attend university, leaving Nigeria with the plan that Obinze will join her once his visa is approved.

However, the visa process takes much longer, and as Ifemelu moves through her college, she becomes a successful blogger on the intersection of race and life (from her perspective as a “Non-American Black”) whilst Obinze struggles to make a life in England as an undocumented immigrant. So there is the dichotomy of gender, there is the dichotomy of race, there is the comparison of life choices and the role of luck, and then there is the question of what constitutes success in each person’s life. The novel has a lot going on, but it’s all occurring underneath the surface because the writing of the story is so strong that the characters’ lives remain the focus for the reader. It’s a slow-burn novel which sucks you in as the pages turn, and once finished, the book stays in your mind for days after. (It’s that good.)

If you’d like to spend the next few days in the company of two smart and very normal young people who are trying to work out which paths to follow in life, this read will give that to you. It’s been so long since I’ve jumped in with both feet to a great fictional read and been transformed into the lives of these characters that I have to admit that this was one of the best reading experiences I’ve had in a long time. Without resorting to hyperbole, I think that this was one of the best novels I’ve read in years, and I kick myself that I haven’t picked it up before now. Do yourself a favor, and choose this title soon. I bet you’ll thank me later.