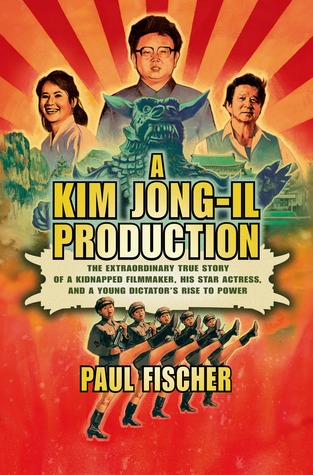 With North Korea* in the news in the U.S. for a variety of reasons (but all revolving around how our Orange Goblin is handling world affairs), I thought it would be a good time to read some NF about this hermit country and its quite strange history. Thus, I happened across this title at the library and dug right in.

First things first: this is not an academic textbook in any way. This threw me off at first, especially as it’s billed non-fiction, but despite this, as I read further and deeper into the book, I was able to throw off my academic lens (not without challenges), and engage with this text along the same lines as I would approach having a cup of coffee with the author at some point. It’s entirely his perspective, and with a significant lack of sources to back things up, should be viewed that way. It’s not a bad thing at all, but it did mean that I had to slightly lower my expectations of the read. It’s still good though, but like I mentioned, more of a conversation with the author than an academic treatise of any nature. (However, to be fair, the error is entirely mine, but it worked out well in the end. The author is pretty funny in places.)

North Korea (and its opposite world, South Korea) were the same harmonious country at one point, but after invasions and the U.S. Korean War, the country was geopolitically divided more or less in half, and that’s when the comparisons veer way off the rails. South Korea was (and remains a country) based on a capitalistic/Western approach. North Korea, through the lineage of the Kim family, has sealed itself and its citizens off from the rest of the world in almost every way possible. The “why” is a bit complicated and can be reviewed through other sources, but the end result of this and how it impacts the citizenry is fascinating. It’s almost so bad that you think “huh. Is this real?” It’s like a really bad film in places, and this metaphor brings us nicely to the main theme of this book.

So, as is the wont of dictators all over the world, what’s good for the geese is not so good for the gander, and so, despite cutting its citizens off from the rest of the outside world, its dictator (current Kim Jong Un) still has access to all the goodies of the Western world.

This book follows the events that happened when a young dictator (actually the current Jong Un’s father named Kim Jong Il) comes into power through succession.

Note about the names: In Korean (both North and South), the first name you read is typically that person’s last name/surname. So, for Kim Jong Il, Kim is the family last name and Jong Il is the equivalent of the person’s first name(s). Kim Jong Il is the father of Kim Jong Un, and so on. It was current dictator Kim Jong Un’s grandfather who founded the country after it had been invaded by Japan. (Yes. It is a big confusing.)

(According to the author, until the early twentieth century, Koreans traditionally did not use family (or surnames/last names). When Japan colonized the peninsular, it required Koreans to use a family last name, and so a vast majority of the Koreans saw a way to reinvent themselves and their families by choosing a last name associated with the country’s landed gentry. Thus, there are only about 270 last names shared among the 75M Koreans (e.g. Kim, Pak, Lee, Park, Shin).

The strangeness goes on, and it’s hard to buy that people do go along with it, but when you consider that the cost of NOT believing it is execution or lifetime sentences of very hard manual labor without ever seeing or hearing from your family again, I can see why few may doubt what they are told, and even fewer can question anything and survive. (if someone in your family does run afoul of the government, not only is that person punished, but so also are the parents of that person, and the children of that person…)

So – to the actual events that are covered in this particular read. The father of the current dictator was really into Western movies, and is thought to have had one of the largest private movie collections in the world. Dismayed at the low level of quality that North Korean film producers had been putting out, Kim Jong Il decided to kidnap one of then South Korea’s most famed producers along with his wife who was a famous movie star and who would appear in his movies. She was also a movie star in her right, so it was a little as though North Korea kidnapped Brangelina….

The rest of the book covers who these folks were, what happened when they were kidnapped, and whether they ever escape the DPRK. (Do they? You’ll have to read it to find out.)

It’s a fascinating read, and gets more bizarre as you read deeper into the book. However, at the same time, as I learned more and more about this closed society, I realized that however strange these events were, they were not as weird as the dictator’s own world, and when the penalty for not believing is death, then I couldn’t really blame people to toe the line.

And then, if you think about it, North Koreans had never ever heard a different story apart from the ones about their Great Leader, so why would they question anything? Nothing would support thinking otherwise.

Plus – in the people’s defense, there are really no other avenues for learning about the events of the world apart from via state-sponsored propaganda. Plus – the people are so poor and overworked that they just don’t have the equipment to learn any other way. For example, to buy a television can take a year or more of salary – and that’s if you can find one to buy. Most people have access to a newspaper (usually in a local business), but if it contained a picture of Kim Jong Il and as it was forbidden to fold or crease his image, the newspaper was usually framed on the wall of a local business for people to look at (but not touch).

This was a very intriguing read for me.

* North Korea actually calls itself the Democratic People’s Republic of Korea (or DPRK) internally, but this name is not really recognized by countries outside of the country. (I think.)

For another North Korea-related read, try:

2 thoughts on “A Kim Jong Il Production: The Extraordinary True Story of a Kidnapped Filmmaker, his Star Actress, and a Young Dictator’s Rise to Power – Paul Fischer (2015) (353 pp.)”