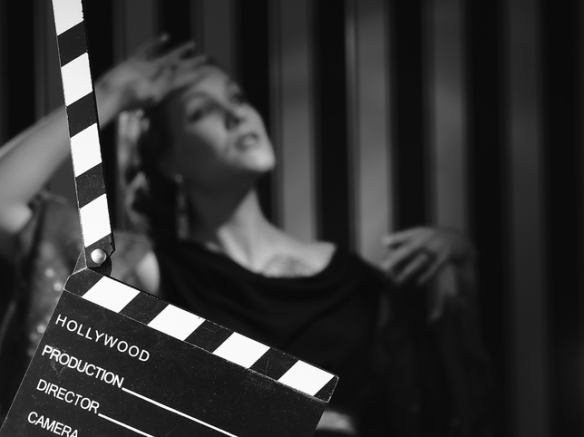 Summer is here in every way, shape and form now we are in June. It’s fairly common to have multiple days of more than a hundred degrees as the high temperature, and I’m hoping that the oncoming weeks will bring us some more rain. (We live in a semi-arid desert region and most of the rain tends to fall around now. However, climate change (even the one invented by China 🙂 ) seems to be impacting that, so we’ll see. ETA: We had rain!!

The laid-back summer vibe continues apace, and it’s a very nice pace indeed. What have I been up to? Well, frankly, not much, and that’s fine with me.

Reading, naturally, has been happenin’ but since I’m spending a lot of time away from the computer screen, I think I’m just going to do some briefer round-up summary reviews instead of the in-depth ones. You won’t mind, will you? 🙂

I have been focusing more on the TBR pile, trying to make some inroads on that (**dry cough**), and I had a fun read of Famous American Plays of the ’40s (Henry Hewes, ed.). I’m not a drama expert in any way but I do rather like reading (and seeing plays) and I’ve had pretty good luck with this series (Famous American Plays of NAME the DECADE). Admittedly, the selections do tend to be very white and male, but you need to start somewhere, right? (Another good collection of plays (this time the 1950s/early 60s) is Six American Plays for Today edited by Bennet Cerf, in case you’re looking for something with variety.)

So this anthology of plays from the 1940s contained the following titles:

Three out of four were memorable, so that’s not too bad considering that I was familiar with approximately zero of these works of drama, and I enjoyed the read for the most part. Good find at the old FoL sale one year. I think I have a couple more of these titles (Famous Plays of the DECADE), so will pull them off the shelf at some point. I’m trying to make them last though. 🙂

(Linked with plays and drama, we also went to a showing of Ripcord (by David Lindsay-Abaire) at our local am-dram community theater. I love going to these things…Incredibly unlikely that I will ever get up on stage, but I have a good time from the audience seats watching others who are braver than I go up on stage.)

I also hit up a YA poetry book, Brown Girl Dreaming, by Jacqueline Woodson (2014) which was great. If you have any younger readers who quake at the thought of poetry, this would be a good introduction as the poetry is approachable and in free verse. It describes the childhood and adolescence of a young girl growing up in the north and with family in the south. Excellent read. Woodson has written quite a bit of YA stuff, so more to chase down at some point.

Picked up a more light-hearted title called The Diary of Hendrick Groen Aged 83 3/4 by an anonymous author. This is rather like an OAP version of Bridget Jones’ Diary – epistolary, funny, dry sense of humor. It tracks a year of OAP Groen as he moves into an old people’s home and makes friends and has adventures. Pretty funny. (It’s a Dutch book, I believe. Same sort of vein as A Man Called Ove, if you’ve read that one.)

Read a rather oblique and graduate-school-mill book by Amit Chaudhuri (2000), Freedom Song. Actually, this title (Freedom Song) contains three different novels inside its pages, but I only read one. As I didn’t really connect with the characters in this first story, I’ve ripped off the bandage and moved the book to the donate pile without reading the other two selections. (Woo hoo. Another off the TBR pile and out of the house!)

I think that those are most of the titles I’ve read since last I reviewed a book on this here ol’ blog, so I think that brings us up to speed now. More reading to come, no doubt…

And remember that jigsaw puzzle that I was working on a few days ago? Here is its most recent progress photograph: 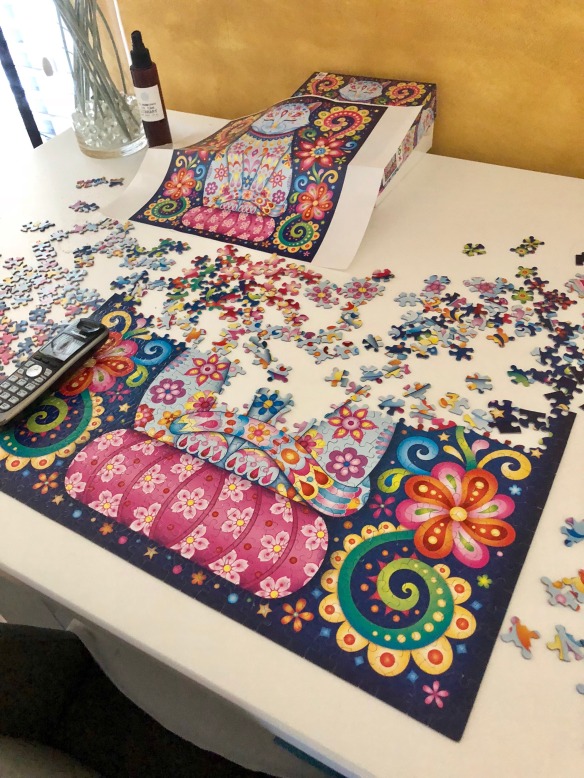 DH describes me as a crackhead in terms of just how addicting these puzzles can be. Oh my….