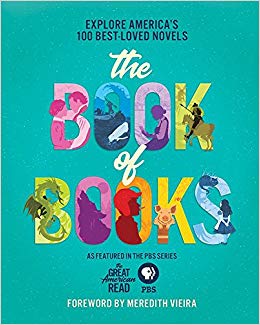 A random find at the library on the New Books shelf, this beautifully produced book was a joy to behold in terms of how it felt, looked, and the photos. It’s a book based on the PBS series, “The Great American Read,” which lists the top 100 fiction titles chosen through a “rigorous national survey” of 7,200 people who were “demographically and statistically representative” of the U.S. who were asked to name their most-loved novel.

This is actually the tie-in book for the eight-part TV series that “explores and celebrates the power of reading” and seems to be part of a “multi-platform digital, educational and community outreach campaign designed to get the country reading and passionately talking about books”. (Sounds like a noble goal to me!) (Haven’t seen this just yet though.)

So, this book does just as it says on the tin: lists 100 book titles, along with some background about the author, the plot, and the historical times, so it’s a very readable eye-friendly collection. I’m not sure if it’s listed in a numerical order of some kind (like a Top Forty would be on the radio), but regardless, it’s a pretty good mix of titles, some that were of no surprise (Pride and Prejudice and Catcher in the Rye) along with some that are not in the usual suspects list: Fifty Shades of Grey, Twilight etc…

(Plus – it’s always nice to read a list of must-read titles and find out how many you’ve already read. Or is that just me? 🙂 )

What was really well done with this title was that it was printed in a great font put on to some heavy glossy paper, along with some great photographs of earlier book covers. It was a heavy book (due to thigh quality production) so more of a coffee table book, but it was a joy to read.

(The only thing to mar the experience was an occasional typo or error in the text. Would have been easy enough to fix with a sharp-eyed editor, but for some reason that didn’t happen. And these weren’t even huge errors. Just ones that someone somewhere should have probably caught.)

So, what were some of the titles? As mentioned, you have the obvious ones (such as P&P and Catcher), but then you’d turn the page and there’d be one that surprised you, not because of the title not belonging on the list (although I’d argue that about a couple), but more because the list strays off the High School Reading List which made a nice change.

Other little treats included in the book are many of the included books’ first lines, occasional lists of themed items such as “Admirable Female Characters” and also the inclusion of some of the “non-traditional” titles (for example, Sister Souljah’s The Coldest Winter Ever, Kathryn Stockett’s The Help or Dan Brown’s The Da Vinci Code) so it was a good reminder of some of the other titles that are out there.

So, rather an enjoyable romp through some book titles along with some super-great production values.

(And if you’re curious about which titles made the list, check here.)