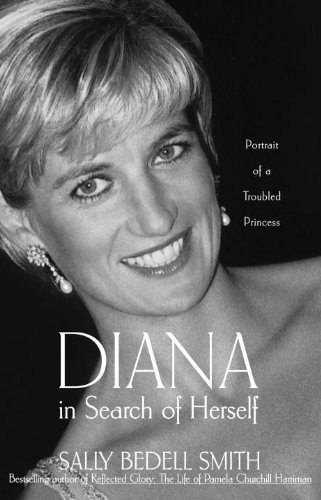 Since there was a rather large English wedding that occurred the other day, my curiosity was triggered to learn more about one perspective of another former royal: Princess Diana.

(Especially after reading two of Bedell Smith’s other books: Prince Charles (good but no blog post for this one) and The Queen.)

(I know, I know… I’m English and typically we tend to rather roll our eyes with respect to the monarchy and the American obsession with them, but it was still an interesting read. Besides, loads of Americans frequently ask me (as the only English person they may know) to explain some of the finer points of this, so I was also just curious. I’m doing it for the people, man. 🙂 )

Bedell Smith is an American writer who is good at her craft and seems to approach her subjects with a pretty well researched and balanced perspective. They’re not academic tomes, to be sure, but they are readable and seem balanced for the most part. Sort of like an in-depth People magazine article of a kind.

So, this title was about the life and death of Princess Diana in respect of how she ended up marrying Charles and then all the drama that came with that. (And there was a LOT of drama.)

After reading this book, the feeling that I end up with is one of pity for everyone involved, really. (Keep in mind that I didn’t know any of the parties though… 🙂 )

And so it seems that most of the drama was actually created by Diana herself most of the time (at least according to this author). Diana seems to be mentally fragile for the majority of this book. Barely educated (no thanks to her parents) and then probably mentally ill on top of that.

If this book is true (and I don’t know that it’s not true, TBH), then the match between Charles and Diana was a mess from the beginning and then stayed that way throughout their lives. I think that the initial impression that many Americans had of Diana immediately after she died was that she was a golden and angelic woman who was stuck with a boring old codger, but I’m not sure that’s the case.

(Whether she was mentally ill or not, she does come across in this read as a particularly high-maintenance personality in a very unhappy relationship that probably should have never happened.)

Bedell Smith uses source after source to show the reader that Charles was not, perhaps, the evil monster that he was portrayed as in the 1990’s, and the end result was that he was just doing his best with a slightly unbalanced wife who he shouldn’t really have married.

I’m not sure what to think really, and since I don’t know them in any way, there’re probably few out there who really do know the events. This was certainly one perspective that doesn’t apologize for either of them in the end.

By sticking to her journalistic sources, Bedell Smith seems to give a fairly balanced view of this messy marriage and I have enjoyed the read.

If you like a fairly chatty tone to your non-fiction, but one that’s also supported by annotated facts and a large bibliography, you might like this author. It’s certainly not rocket science, but it’s still a pretty good read for when it’s hot outside and you don’t want to think too much about anything in particular.

So, not a bad read. Not a great read. Just somewhere down the middle.