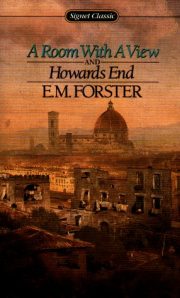 So this was the second Forster novel that I have read, and this is a lighter and less serious work than “Howards End” which took a harder look at the state of affairs of England in the early years of the twentieth century. “A Room…” is rather reminiscent of Austen in some ways for me, in that the author dissects societal expectations and conventions, and places the focus of the main characters on “true love” as opposed to what is expected.

Lucy Honeychurch and her elder cousin, Miss Bartlett, are having a lengthy holiday in Italy staying at a local pension in Florence. As happens in bed-and-breakfast situations, the duo meet the other guests also staying at the pension, and despite petty class differences on the part of Lucy and Miss Bartlett, they end up going on side trips with the other guests. Lucy ends up spending time with the Emersons (father and son),and falls in love with the son.

As with “Howards End”, Forster seems to enjoy forcing two different sides for the readers to choose from: one side being Edwardian convention and society with all its rules, the other side being freedom from expectation and the importance of Nature/being outside. (“Howards End” was all about science vs. art etc.) This duality links with the title, the room (in most cases) being linked with characters (and situations) where there is little individual choice (e.g. the noxious Cecil or perhaps Mrs. Honeychurch), where the rules and conventions rule the day. As a contrast to being encased inside, being outside in Nature is given extra meaning in many scenes, most of which refer to the idea of freedom when outdoors — when, for example, the first kiss happens for Lucy, it is exchanged outside in a grove of violets. (Nature is the obvious winner.)

And so the story continues with the struggle of Lucy, the heroine, who is torn between marrying the “right” man or the man who she loves… And predictable though the story may be (to a point), this does show a strong female character who eventually stands up for herself and there is somewhat of a small twist at the end. (Not breathtaking, by any means, but good for the time and age.)

So, this read rather reminded me of some earlier reads over the past few months:

…and numerous other reads, both fiction and non-fiction, ranging from late nineteenth century to, really, the present day. American society (perhaps especially the society in Texas where I live) still seems to be pretty married to the two dualities of individual freedom vs. societal expectations, and the duel of science vs the arts. (In fact, if you follow trends in higher ed, there is an excitable ongoing debate among the various university administrations of humanities/arts vs STEM subjects).