I have recently been exploring the world of artist Eric Ravilious who was an early to mid-century English painter. I think he came across my radar through one of the large museums in London (or somewhere) having a big retrospective and various bloggers had seen it and mentioned him. I have seen his work elsewhere, but hadn’t connected it with the same guy, and I am just in love with it. Very charming, very *English*, it seems to me. Some may argue that they seem a bit trite, but I love them. They simply remind me of quiet afternoons in the English countryside rambling through the fields or sitting by the river when I was younger. A very pleasant way to spend an afternoon, if you ask me.

This photo (above) seems rather unlike what his biographers say about him (nice and gentle, optimistic etc.) so perhaps he was doing his best “moody artist” pose for this one…

And an interesting article about Eric Ravilious from the Guardian.

He was also an Official War Artist during WWII (and the only one who was KIA), and yet his pictures from that period have been described as domestic more than war-like. 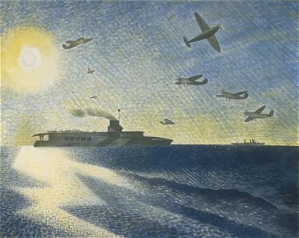 Here is a link taking you to an exhibition from that time.

And then, to keep this post slightly bookish in nature, I am also reading this one about him:

Lovely color plates in this one to drool over…