Having been immersed in watching the PBS series, Victoria, this Spring, I became pretty interested in learning about this particular monarch and so, prowling my TBR shelves (go me!) I came across this thick volume about Victoria and dug right on in.

First of all, I think that this detailed biography will only check the boxes for someone who is REALLY interested in Victoria. It goes into a lot of detail about the politics of the time, and so if you’re not really into that, I’m not sure that this will be the read for you. I had to really concentrate to stay alert through some of these parts, so I’m thinking other people may have the same problem. (There may or may not have been some skimming at times.)

Having said that though, Wilson has done a good (and thorough) job of giving the reader the details of Victoria’s life and times, so now (after 642 pages), I feel confident in having a much more thorough overview of Victorian times and their tubby little queen. 🙂

Wilson reviews the entirety of Victoria’s life, from birth to death, and generally speaking, it was a great read if you’re wanting to learn more about this enigmatic monarch. Wilson is a scholar and a biographer, but in spite of this, he still manages to sprinkle humor and wit throughout the book which brings a sparkle to an otherwise pretty dry read.

To be honest, the only really dry bits were towards the middle of the book (and her life) when Albert dies and when Victoria chooses to remove herself from public life and events for approximately 30 years or so. (Not a bad gig if you can get it.) She does, eventually, get back into things, but it takes quite a while for her to do this, and in the meantime, peeps are pretty mad at her, enough so there were rumblings of England turning into a republic (sans Queen). Her return was rather in the nick of time.

Wilson also addresses the significant others in Victoria’s life post-Albert, including John Brown and the Munshi. (See below for links to other related reads you might be interested in.)

I can’t blame them, really, as Victoria was hiding in her various palaces and only doing the minimum duties while she nursed her never-ending grief for Albert. (She did manage to throw up a lot of expensive statues and memorials for Albert throughout the country, but actual useful monarchical work? Not so much.)

Despite this avoidance of public life, Wilson does show that Victoria was keeping up with the paperwork related to parliamentary life and diplomacy overseas, but it was very in-the-background for many years. (If you’ve watched the Victoria series, she goes through quite a lot of advisers and prime ministers over the years, and despite all the rules about the monarch and the government being separate and equal, Victoria liked to have her little hand in things of governance at times which raised some eyebrows. Anyway, this book rather sorted out that complicated revolving door for me a little more, so that was helpful.)

So, I think that this biography is more for the Victoria Super Fan than merely a casual observer, and even then, the middle bit about the political landscape was slightly dry (shall we say?)

However, this was more than made up by all the details about how closely the British royal family was tied up with mainland European royal families through marriage (mostly), and it clearly lays out how much planning went to determine who should get married to whom and when, and to see how her nine children fare (or don’t as the case may be). (And Bertie fares as well as you would expect…)

Thank goodness for a family tree at the start of the book. Some people change names when they’re put on the throne so it can get a tad confusing in places.

As mentioned, Wilson is a master biographer who goes into great detail about the life and times of this miniature monarch. (She really was not very tall.) I know that I have another volume by Wilson about the Victorians in general waiting on the TBR shelves so feel comfortable looking forward to that read at some time.

Other related reads on the blog: 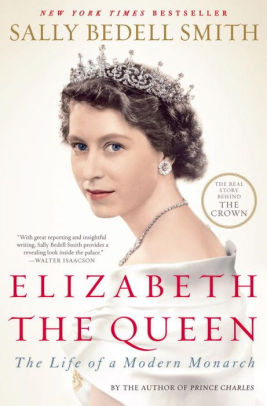 Since we’d just finished watching the latest season of The Crown TV series, I decided that I was interested in learning more about Her Majesty (HM)* QE2, and having had an enjoyable read of a biography about Prince Charles (same author), followed it up with this bio of his famous mother.

Sally Bedell Smith is an American author who has a penchant for writing biographies of royalty, whether that is monarchy-related royalty (such as the Queen) or Camelot-related royalty (such as JFK et al.) This author can write very readable books and does so in a breezy rather People-magazine-like manner, so I think if you know that this is fairly superficial coverage of a very private and elite world, then you’ll be squared away. It’s not, however, a very heavy fact-based book, but Smith doesn’t claim otherwise really.

So this title covers the life of Queen Elizabeth II (or Lillibet, as the Queen Mother would call her) up until 2012, and the one word that jumps out at me after having read this now would be “dutiful”. Smith does a thorough job covering how QE2 has grown up, inherited the throne when she was a young 21-year old, and she seems to do a pretty decent writing job with the limited public information that the Palace office releases. (Obvs, no F2F interviews with the royal family.) (All the info seems to come from secondary sources, and thus the People magazine comparison.)

The Queen is portrayed as playing a huge role in continuity and consistency, whether complications arise from within her family or outside in the world at large. My own take on the Royal Family is that they are a link over the centuries in the history of the UK, and although they may be expensive to keep and house, they are also interesting in their right, acting as a strong lure for tourists from around the world. From this read, it was interesting to see how hard (some of) the family actually work in the Firm (the nickname for themselves), and although I can see the attraction of being a princess, it’s also a gilded cage in a lot of respects.

This read is obviously pro-monarchy, and does seem to be rather full of speculation rather than fact in places, but if you remember that the book is just a biographical take on a very private but public figure through an American author’s worshipful lens, you’ll get on ok with this. It’s not academic; it doesn’t break any new ground; there are no surprises in this, but it’s also quite a good read (despite all those caveats).

What I liked most about this biography was that it was also a useful primer for some of the history of England during the twentieth century. Despite growing up in England, I still had some huge gaps in my historical knowledge wrt prime ministers, Princess Margaret, politics, and other topics, and I found that this was a pretty useful history book (albeit in a sycophantic and superficial manner).

As I think about this, this title was (and is) tailored to the American market (myself included since I live here), and through that lens, it does what it says on the tin, simplistic though it may be. It’s a good birds-eye view of the world of QE2 and the people who surround her, and it was helpful to me to be able to put more context on some of the larger monarchical events that have happened during my lifetime.

However, I think it’s important to remember that this is more of a celebrity biography than anything, and perhaps is more of a taster of the life of HM than anything else. Despite the shallow depth, this was still an enjoyable read, and I think that it’s scratched that “The Crown” itch for a while, and opened several rabbit holes down which to chase.

Now I’m going to peruse the shelves to see what else I can find to read from the TBR pile.