I found this little Librarian badge at the British Library in London, and had to get it since it reminded me of those long-ago school days when students were given “jobs” to do (along with special badges if you were lucky).

Although I was sadly never offered the position of librarian, I would have jumped at the chance. Instead, I have this fabulous little badge to make up for that dreadful oversight.

(Our school used to give out “posture” badges, although I didn’t actually earn one. (My sis did though.) I may have slouched my way through my school days, I think…Tired arms and shoulders from swimming training?)

Another read from the TBR pile (go me!), this is a novel that revolves around the life and times of a young teenaged boy growing up in Birmingham, UK in the 1970s. It’s from the POV of young Ben Trotter (called Bent Rotter by his friends), a beginning romantic poet and musician schoolboy who’s head over heels in love with Cicely Boyd, one of the most beautiful girls at their partner school for girls. And although it’s written with this guy’s POV, it also is heavily influenced by the current affairs of England at the time: the never-ending strikes for coal, car-makers, and others. The IRA formation and its bombings. (We would have bomb drills at school growing up.) Progressive and punk rock. (Plus there are some similarities in character between this protagonist and Adrian Mole, although this is much much more serious in nature.)

It also happens that this protagonist is much the same age as I happened to be during this time, so there were a lot of cultural references mentioned that resonated with me as I was growing up in England.

I had been on the lookout for a gritty domestic novel, something along the lines of an “Angry Young Man” or a gritty kitchen-sink drama, and this one fulfilled that category perfectly. It is gritty – a lower-middle-class family living in an industrial city working in a car factory facing union employees and dilemmas.

It’s quite a serious book in some ways: it deals with love (young love, marital love, affairs), it deals with political issues (the strikes, the unions, the IRA), it deals with class, but it’s all presented in such a way that it’s actually pretty hilarious in places. It uses a deadpan satirical perspective which matches the grey cold and damp country in which it is placed, and the world of the 1970s provides a matching cold and damp background. (Thatcher is Prime Minister, the National Front makes an appearance…)

But it’s not all gloom and doom. Young Ben, the protagonist, is yearning to be a serious poet/musician (Coe is a musician as well), and writes experimental music which he believes is meaningfully beautiful, but he is surrounded by his friends who labor under more prosaic goals: getting a girlfriend, trying not to be embarrassed by their parents and/or siblings, struggling to get through school and the rather Lord-of-the-Flies culture that exists in that world.

(Random but interesting: “The Rotter’s Club” is believed to have the longest sentence ever written in the literature of the English language: 13,995 words (ahead of James Joyce’s Molly Bloom in “Ulysses”. Not that I’ve read that, mind you.)

The book is fairly straightforward in how it’s structured, but the straight narrative is interspersed with excerpts of letters, leaflets, and articles from the school magazine, including this longest sentence. (It goes on for thirty-three pages.)

There are several stories interwoven throughout the book, both tragedy and comedy, and there are some serious moments as well, particularly with regard to how some of the characters feel about religion, but it all fits together very well.

And – good news for me – Coe has written a sequel featuring this same group of characters except set in the 1990s. Going to have to keep a lookout for that title (“The Closed Circle” [2004]).

Well, somehow the end of summer has arrived, and I am now immersed in the annual ritual of going back to school. I had a great summer, and now I’m looking forward to a lovely autumn. My favorite month – bliss.

It also means that (hopefully) we are on the downside of moving to cooler temperatures, but it will still be a while yet. It was close to 100 degrees outside yesterday, so I’m very thankful that I happen to work in an office with air conditioning.

August turned out to be a busy and fun month. I finished up teaching the writing class I was handling as a summer class, and then I met up with my lovely mum and sister up in Toronto (one of my favorite cities now). Had great fun and walked our little legs off. Now I’m trying to find another time to visit all the other things that we didn’t get to see in our last visit… Did love Toronto though.

Niagara Falls (from the Canadian side of things.)

After that trip, we had time to wash our clothes and do a jigsaw puzzle with my mum who stayed with me a few days post-Toronto. Good fun, as always.

My lovely mum loves jigsaws as much as I do…

Then, the Superhero and I went for a long weekend to sit on one of the lovely beaches in Mexico. We stayed at an all-inclusive resort so it was worry-free, apart from deciding what we wanted to eat and drink at intervals! (Very nice.) 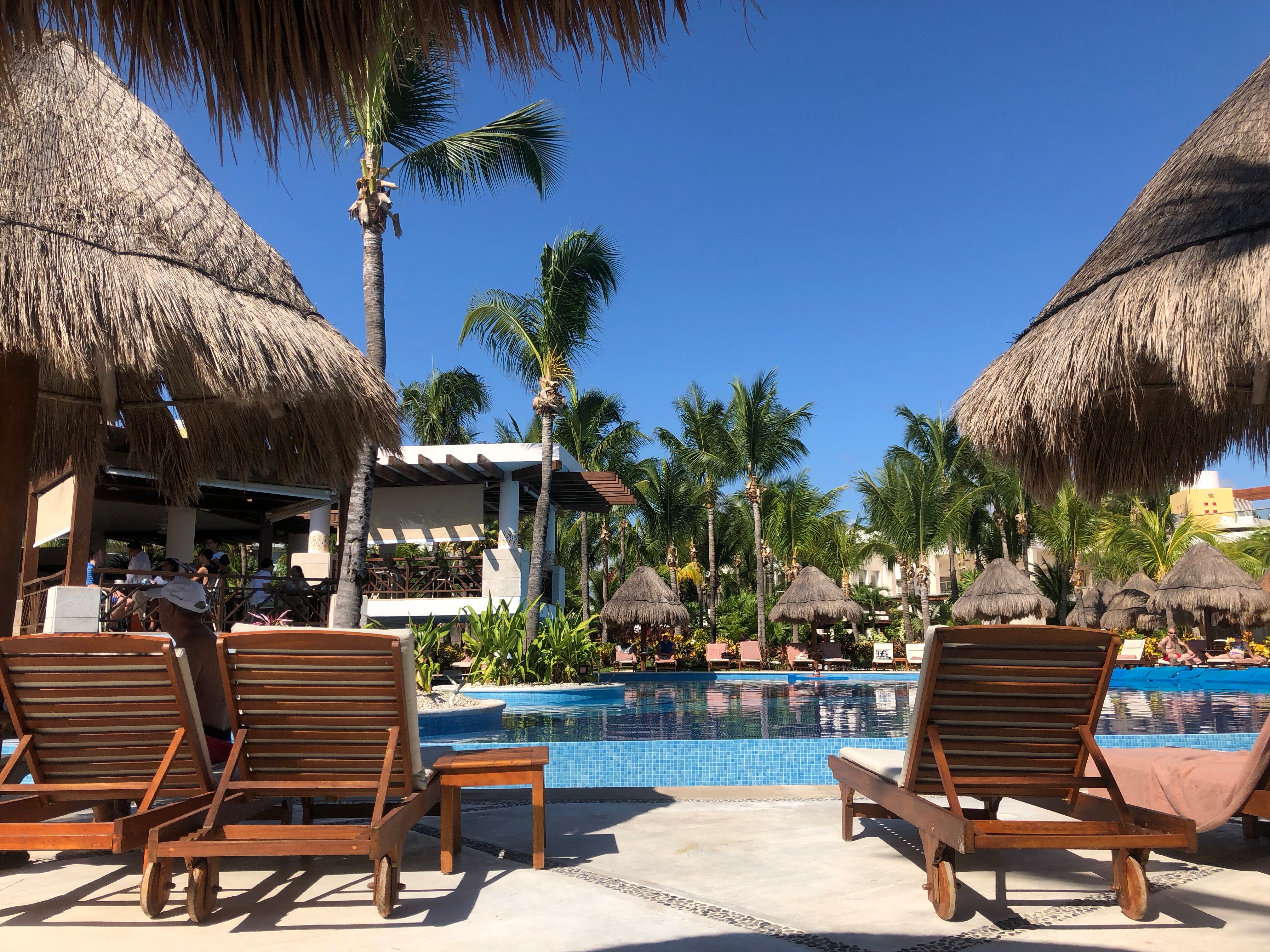 Now it’s back to school. I have two classes I’m teaching now: both writing-intensive (which means grading-intensive for me), but as I love words and writing, I’m excited about getting to know this batch of college students. Lots of smiling faces right now. 🙂

Reading – I’ve been doing that, but I’ll save that for another post. Just wanted to pop in here and let you know that I’m alive. I’ve just been out there living a busy life!

Hope your summers were stupendous as well.

Us playing with the mirrors on top of the   CN Tower.